Tires and some other randomness

I need to replace at least one of my tires.   The rear is looking worn and well used while the front still has some tread on it.
Normally I don't think about tires, it's just part of the normal maintenance of owning a vehicle.  I put air in them, I change them out when the tread is gone or I start to slip.   Of course, in my car or Jeep the tread is a different story, the performance will be affected if one tire is an issue but not as much.  A little spin on a bald tire in the rain is not really an issue as long as the other three catch.
On a bike, it's another story.  A spin can kill you.  Not gripping the road surface correctly can cause an accident.  Riding has made me very aware of what can and does go wrong.  I've asked around and everyone points to the Pirelli Diablo as the tires to get.
When your riding any sort of 2 wheel motorized monster I suppose you realize just how close the road is beneath your feet.

I used to very interested in hiking and Orienteering.  It was a wonderful feeling to get out into the woods for a few hours, sometime with just a map and compass and my own wits and knowledge.  Well I was not a serious orienteer I did enjoy getting out into nature and walking about.  Being out in the woods brought me a peace I rarely find in everyday life.  Nature recharged my batteries and cleared my head, no matter how bad the day or depressed I was; spending time out in the woods was the best thing I could do.


Running around on my bike does the same, but their are differences.   I commute, I've used my bike for a route I run...only rarely have I've been able to get out and enjoy a ride where I can get lost for a bit.  To see what is down that road, or to the left where I usually make a right.  Working the way I do the chance to get out and do something different for a few hours is wonderful. 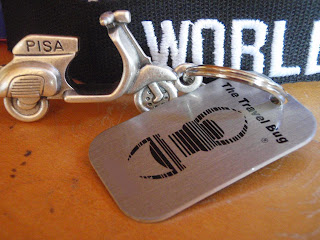 When I learned about a group in nearby Clearwater, Florida that is doing Geocaching by scooter I could not help but get a little excited.  I am not a fan of Geocaching as such, preferring the older methods of compass of maps - a acoustic GPS if you will.  It would allow me to explore the city of Clearwater and St Petersburg a little more.  It allow me to get out a little more and meet some fellow scooter riders, which is a goal for 2012.

As spring approaches the GF and I are already planning and starting to work on our garden.  A few tomatoes, cucumbers and carrots.  Peppers, basil and of course some wonderful flowers, including some mammoth sunflowers to hold up the fence.
I've been reading some books on Homesteading.   I've been interested in making my life simpler.   The bike is part of that equation.  Growing my own food another.
Posted by The City Mouse in the Country at 11:17 AM

Robert - 15,000 comes quick when you are daily commuting. I am at 10,000 km on my scoot and I am going to need a few things soon for it if I keep it for a fun commute. I need to change out the belt and probably need new tires front and rear. I am hoping I keep it until the Capital City Scooter Rally in May, but I am not sure as I am enjoying riding my Honda Shadow immensely. Who knows maybe one day I will go back to my scooter roots. Enjoy your scoot, there are great adventures to be had, I know I had some great ones last year.