I will never understand why people insist on getting smaller cc bikes.  I believe you need to have the right bike for your circumstances.

Now please don't misunderstand me.  I know very well why someone would want a lower cc scooter.  Hell, I started riding on a small Zuma 125 because of the lower costs, fuel mileage and other reasons.  The top speed on that bike with an open throttle was maybe 55 mph.  Living in the city it was fine for stop and go driving but I would never take it out onto a freeway, nor would I ride it night on busy roads.  In all fairness I did ride at night on the Zuma but it was on back country roads at 1 AM.  Ninety percent of the time I never saw another car.

Yesterday I on my way home from work taking my normal route.  It was after 10:30 at night and traffic, while not heavy was certainly heavier than normal for that time of night.  I pulled up to a red light and see a single red dot about a mile ahead of me.  "Another biker" I think to myself.   The light goes green and I catch up to the other bike in a matter of minutes.

It was some guy wearing a dark shirt, no helmet, no jacket, no reflective gear at all riding a motorized bicycle.  His top speed was maybe 30 mph.  We were riding on a  road where the speed limit is posted as 65 mph.  I yelled over to the guy that I would tuck in behind him and follow him.  My larger bike would not protect him of course if we got hit from behind, but at least my taillights and reflective stripping on my jacket would be a bit more visible.  He took the lane closest to the side of the road, I took the outside and for roughly five miles we putted along, getting passed by all type of cars and trucks.

I even turned on my brights to help him see.  Eventually he turned off, taking a similar road and I continued on straight wishing him the best.  Hopefully this was a one time thing for him.  He was taking a bigger chance than I would ever do.  In fact, the reason I sold the Zuma is that I would have to travel that road back and forth to work; I didn't think the Zuma was safe on those roads even with it's higher speed. 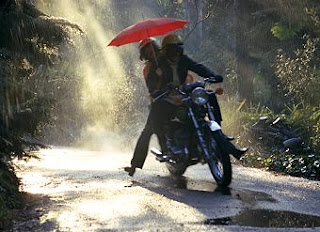 On a more personal note it rained over the weekend.  We needed the rain badly here in Western Florida, as we are in a prolonged drought, but it also showed a weakness in my plans for the future.  I know that eventually I will have to get rid of one of my cars.  It just does not make sense to me; economically or environmentally, to have two cars.  That however means riding in the rain at times.  It poured here the other day, buckets of rain coming down.  I have a rain suit and a decent one at that.  I've not used it yet.  I decided to take the car one day, and I'm glad I did because the rain was so bad that I would not see 10 feet ahead of me at one time.  The other day I rode into the dark clouds knowing I had a 50% chance of getting wet.  I also had a 50% chance of staying dry.  I stayed dry.

If I want to get rid of at least one of the cars, I have to accept that I am going to get wet.  That I will have to ride in less than ideal conditions.  I'll get there.


Posted by The City Mouse in the Country at 9:09 AM

It's all about the gear in wet weather riding. I rode through a wet west coast winter and stayed dry for the most part. Riding in the rain sucks, you have to be on full alert because people don't see you and the oil on the road makes it slippery.

The fellow on the moped was lucky you happened by, you were a guardian angel. Now if only they would get hi viz gear and wear the proper attire, but more importantly stay off roads which they have no business riding on. Crazy what some people do.

Heck I have 500cc under me and still don't like riding at night.

I agree with you. Here in Vancouver we have lots of bridges and cars go too fast. There are may 49cc scooters which cannot maintain the speed limit. When I see them I do as you did, protect their rear. The problem is that they are not required to take courses or know which lanes to be in to protect themselves.

I ride a 101cc SYM Symba. It is the perfect bike for riding on secondary urban streets. It manages 45mph even up a moderate grade. It gets 110mpg. On any street/road where the speed limit is above 45mph I am very uncomfortable. I've found myself on roads I shouldn't have been on and don't like the feeling of being a target.

We are in the "New Scooterist" season here. It happens every spring, especially when gas prices are up. This is when people buy there new 49cc scooter. Yes, they have no training and it shows. Many of them ride off to the side of the street where they probably rode their bicycles.

Riding in the rain costs about 15% of your traction. Slowing down and not leaning so much into turns helps. I like riding in the rain. The one exception is when it rains just enough to make the street wet. I, also, hate it when they spray the chemicals to melt the ice and snow before it begins to do anything weather wise. It can be a little slimy. I suspect you won't have to worry about that :)

My experience of 15,000+miles on the Symba is this: If I wish to travel roads where the speed limit is above 55mph I need at least 250cc.

Thanks for the share and ride smart.
~Keith,
Circle Blue