Ah Maintenance your name is money!

Someone, somewhere in my comments section said that owning a bike is like owning a boat.  There is always going to be an issue somewhere.   How does that old joke go?  "What does BOAT stand for?"  "Bring on another thousand."

Lately I've been feeling that way about the bike.  I finally got my ugly ass in gear and had a major maintenance day on the bike.  I knew going in that this would would run me some money, after all I was finally installing the new CVT belt.  While that was open I figured I would get the final drive oil replaced, after all it had been over a year since that was done and it was time.  I had to get the engine oil changed out, the brake fluid levels checked, the front tire would also need to be replaced soon.  In other words, lots of little things that add up.

Other than these basic maintenance needs the Burgie has been running fine.  Better than I could have hoped for really.  She needed a wash too but that could wait.

Normally I would take her to the place where I bought her, Eco Green Machine, but I had issues with them ever since the rear brake issues.  When I requested they open up the CVT casing and give me an idea on the belt life during an oil change they somehow managed to take all day and still could not get the casing off.  Even though they had a air hammer and I was there when the casing was attached with a air hammer.  I am not going to use any negative words here but lets say that I could no longer trust there work.  Nor would I feel comfortable in recommending them to another.

So I took my bike to a mechanic's shop here in town.  Frankly I could not be happier with there work so far, even though it is a little pricier you get what you pay for.  My whole bill was $180 for the work done and it only took them three or four hours for everything.   Sadly though they uncovered a problem. 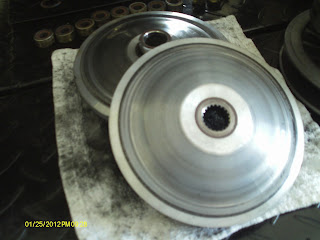 This picture shows some uneven wear and tear on the clutch assembly.  If you look closely you can see where it actually created some grooves into the metal.  According to the mechanic it may have been sold to me that way or may have been assembled wrong. 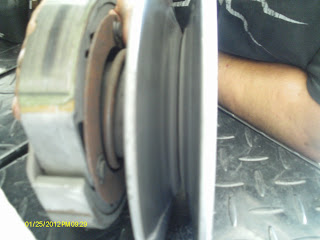 Additional photo of the clutch assembly.  Notice the dark lines and groves. 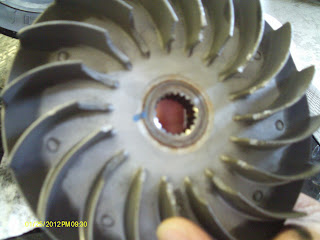 Chipped and broken pieces here.  Somehow the rollers and sliders however were still in good shape.

I'm in the market for a clutch.  The price that they quoted me was for the Dr Pully HIT clutch, which is a quality part but frankly its an older bike and I am thinking that the Dr Pully clutch may, in fact, outlive the bike.  So it's tempting.

I'm in the process of getting some info now.

Posted by The City Mouse in the Country at 10:38 AM

When people say to me, "You must save a lot of money riding that scooter." I respond by saying I've certainly used a lot less gas riding than I would have driving, but have I saved money? Not so sure. The comparison to a boat is an apt one.
~k