Living inside my helmet - the sequel

I am trying to understand something.

I ride to work nearly every day, I used to ride in what would be considered adverse weather as well (rain and cold).  Lately however, and I blame the hours of my commute now (more 9 to 5ish) I've not been riding in the rain much. 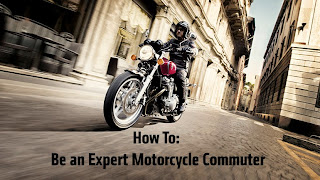 What I'm trying to understand is this.  This past weekend the streets were filled with bikes and bikers.  Monday, Tuesday, Wednesday rolls around and guess what.  Nothing.  Nada.  Zilch.

Oh there are a few lone stragglers, a lot of little 50 cc and 125 cc scooters once I hit the city streets proper; which makes some sense as the little scoots are better designed for city living than the wide open spaces that I normally ride.  Still though...why are the streets full of bikes on the weekends but not on the weekday?

Or, to put it more simply, why don't bikers ride more?

Now I know this post will not apply for those up north or out west where the weather is nasty.  But hopefully it will give you something to think about for the next riding season.

The first thing that pops into my mind is the number of cars on the street.  All bikers have seen people putting on make-up, looking at their phones, making phone calls, fiddling with the radio and not paying attention.  I get that.  Those people are dangerous.

It's something we all have to deal with and I know that running back and forth from 9 - 5 has sharpened my senses.  I've always tried to practice good safe techniques, now I'm noticing that I push those techniques more to the front.   I also understand that yes, my risk increases riding during the "rush hours."  My risk also increases if it's raining during those hours.

I wonder if gear is not part of the problem.  Gear can be expensive, although generally it's a one time expense.  A good helmet, a good safe jacket (preferably hi-vis), boots, gloves, etc.  It can add up and once again, if your going to ride in every day safety gear is a must.  The more I look around and learn about this lifestyle the more I realize that the people that rack up thousands of miles a year are wearing the best gear they can afford.

Gear may not be sexy, but it's going to save your life.  Which is the other problem I think.  It's not sexy to commute.  No one can see your leather, your girl on back, your shiny chrome.  You have to take the time to clean your bike, your equipment, your oil.

I think we have all been brainwashed some.  Easy Rider, Sons of Anarchy, even the comedy Wild Hogs, and a thousand and one magazines and adverts that show an alternate way to live.  A one that is not mundane.  One that we can escape to during the weekend.  Riding to work every day sort of ruins that fantasy.  Commuting is boring.

Storage can sometimes be a issue.  I understand that too, having bought a top box to carry my lunch back and forth in.  This being Florida, my rain gear is always kept on the bike.  There are ways around storage issues. 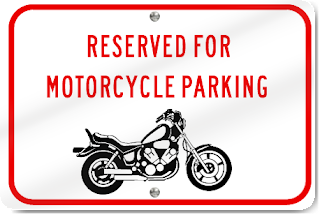 Parking can be an issue.  I know at my job for example "our" spot was recently compromised to make way for a travel van turning radius.  Now the various bikers are forced to park in various places.  I've requested a single simple spot with a sign.  At least four, five, or six bikes could fit in that spot, depending on how they park.

Until that happens we are parking in front of the building in a "visitor's" spot.  Some days I'm the only bike there.  Other days there are two or three others.  No one has asked me to move yet.  Sometimes you have to fight for your rights.

As I read the various blogs and forums that I frequent the one thing that impresses me again and again is the passion that people have for their bikes and life choices.  Never in a million years did I think I would have the same love for biking that many of the people that I respect and admire do.  Hell, ten years ago if you told me I be riding a bike and writing a motorcycle blog I laugh at you.  Yet, here I am.
Posted by The City Mouse in the Country at 7:25 AM

I think for me not commuting by bike (or riding M-F) is part laziness at not wanting to gear up (I do wear ATGATT) for 3 measly miles. That and helmet head at the office. Did I mention lazy? So much easier to walk out of the house and take the city bus.

Agreed. There are some days I don't feel like gearing up as well, and I have a longer ride. At least your taking the city bus however rather than your car.

Here on the West Coast in So. Cal. many ride to work. The weather is not so bad yet. Parking is the same here though. It is always hard to park and with so much available space wasted in the lines of the parking spots, is gets frustrating just the same.

Commuting on a regular basis does present challenges that casual weekend rides do not.

If you ride out, it means you have to ride back. Since if might be raining in the evening you have to plan for that.

And there are numbers of other contingencies too.

It's a significant commitment which is why mbamy riders don't commute.

Yesterday morning it was about 6C and pouring rain. I drove. A guy on a motorcycle passed me, riding like it was a summer day. Now that takes courage, lots of experience on wet roads (or oblivious to the risk) plus great gear.

I only take the city bus because hubby has the car.

We only have one car, but 4 motorcycles. We may buy another smaller commuter car, but sometimes it is hard to justify spending the money.