We all make compromises.  I thought about that last night as I took a slightly different way home.

It would take me slightly longer to get home but I would not have to deal with red lights or traffic, neither of which I was in the mood for.  As I made a left turn to put me on that path; a guy wearing flip flops, no helmet, no jacket and no gloves pulled out in front of me safely.

He was on a little scooter.  I'm not sure of the make or model.  His feet hanging off the sides of the bike either for balance or because he was an idiot.  I'm not sure which.

"Dude, put your feet up!" I yelled over at him at one of the few red lights on this route.  He gave me a stupid unknowing grin as I turned right and he went straight. 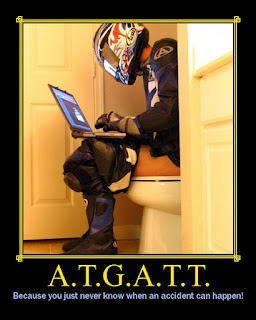 That same night I was passed by something known in the biking community as a "squid."  I was asked about that term once.  I defined it as a idiot biker.  Someone who when they go down...and they will go down...will leave a long black inky spot on the road.

I'm not saying that I'm the perfect rider.  I've not always gone ATGATT, although I always were my helmet.  I rarely wear my riding boots, although I know I should.  They, sadly, have come in handy the two times I've been involved in accidents.  I've compromised my safety because I'm required to have "casual dress" at work most days.  My boots, although comfortable, are not meant for a business environment.  Loafers or dress shoes it is.

I am normally just wearing a thin layer of gabardine, that is all that separates me from the road.  A compromise between the requirements of my job and my safety.

So when I see the weekend Harley riders out with no helmets and jackets I grumble at them.  When I see that kid and his girl on the rocket with her bare legs exposed I scoff.

I wonder if I have that right.
Still though, I'm not the rider that I used to be.  I've come a long way since I used to pull off the side of the road to let cars pass me by coming home from work early in the morning.

The young man that got on the scooter to save gas money, and who may have been having a small mid life crisis too, has grown up.  Today I pass with confidence.  I'm used to riding highways and busy city streets.  I've ridden in less than ideal situations and down bumpy dirt roads.

Even though the Lovely Susan may not like it, I've grown used to taking a few different ways into and out of work to mix up my ride.  If it were up to her, I would take the same way in and out every day just so she could find me in case of an accident.

I've got to get better at riding though.  I still make errors, sometimes I let my mind engage other thoughts and I am not concentrating as much as I should be on the road ahead.  I have to remind myself to check my mirrors now and again because something could be catching up to me, especially on those long straightaways that Florida is known for.  I need to become a better rider.

Experience builds that of course,and I also know that it just takes a car stopping up short or pulling out in front of me to ruin my day.   After nearly five years of riding and blogging...I realize I still have so much to learn.

I've told Susan that I'm done if I have one more accident.  I'm serious about that. 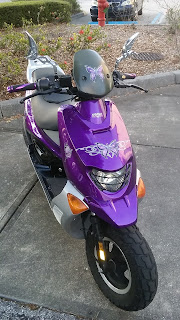 I'm still not a fan of the little 50 cc scoots that I see in and around town, and I would still argue that a bike with a minimum of 125 CC is needed in the city.   I don't care what it looks right.  Just ride it and ride it well.

What I am sure of is my next bike will most likely be a Honda CTX  If Sue gets her way then we are going to get either a trike or a Spyder RT.  Neither of which I really have any desire for, my choice being the CTX.  However as Sue gets stronger (she is recovering slowly from a variety of ailments) there is a good chance that we may start to tour.  For that, we need something built for comfort and stability.  Either model would require adjustment on my part...but either would work.

Who knows, I never thought I would fall in love with my Kimmie either.

All I know is that I plan on riding safely for a long time to come.

Grown up in an environment (Germany) that promotes safety (over fun), I have a hard time letting go of ATGATT. When it is too warm I still opt for helmet, gloves, glasses, boots, jeans and an armoured light jacket on a motorcycle. However, on my scooter I have been seen without the jacket... on very hot days. That or I am not riding at a all, because when I feel uncomfortable with the heat I am not a safe rider either.
I believe everybody should take their own responsibility, and accordingly chose wisely for health care. I might go without one or the other part of gear but I never ride without a brain bucket.

Nice Bike, the CTX. I tried to convince my hubby to get one but he sticks to his Burgman scooter.

Over 20 years ago when I first started riding pillion with Troubadour I didn't wear a full face helmet or other riding gear. I did wear a small helmet and usually jean jacket, jeans,and sneakers. Now I don't ride without ATGATT. It would be hard to go back.

Riding styles change as do needs. If you and Susan do some touring you will make compromises in the type of ride, but I am sure you will enjoy it as you will be together.

I think the CTX is pretty cool, although I have a hard time with forward controls.

I've actually gone the other direction, from full ATGATT all the time 40 years ago to "let's see what the weather is like" now. The helmet is non-negotiable for me, even where it isn't required by law, but you can sometimes find me wearing sneakers and a tee-shirt, especially if just heading over to the golf course, or when it's REALLY hot (30+C in this area).

I always advocate ATGATT and practice that philosophy ALL the time, but thats my choice after my initial foray into scootering and getting up close and too personal with pavement 5 years ago. That day still haunts my life with pain. I have changed a few things finding more comfort variances with mesh gear and kevlar riding jeans, but its still ATGATT for me. I have a 15 minute commute to work and I gear up & haul work clothes & change.

I have also learned particularly with teaching that I give my students the straight goods and information and then have to let it go and leave it for them to decide, altough I always hope its full ATGATT. I see lots of stuff on the road, that as a motorcycle instructor makes me cringe and think "If only they knew", and sometimes I will say something and have learned that sometimes people just haven't bern given enough information, and others its choice and risk mitigation.

I think you would love the CTX it is a great ride and with a custom seat it would be a nice tour bike. If I was looking for something for touring I'd think bike & side car over spyder or trike. I have to say though the spyders are pretty cool.

Rob when I was commuting I reasoned that I was most exposed to risk because it was 60 km five times a week. I left office clothes at work and wore a full face helmet, aromored jacket and pants, plus boots and gloves.

I had one off, slid fifteen or twenty feet, with no real injury, just a bruise where the bike landed on my left knee.

When I go for a little isolated slow ride, I sometimes omit the boots and pants, but that's it.

What others do is their business.

As for your future choice, it's horses for courses. The joy of touring with Susan wikk mitigate the issues you may have with a trike or Spyder.