My boss asked me that question yesterday.

I really did not have an answer ready.  "Well, I like to help people."

"Okay Ms. America and we all want world peace too...but answer the question.  Because if you don't know what motivates you how can you motivate someone else?"

It was a good and fair question.  It took me a bit of soul searching but in the end I found the answer.  What motivates me?

I'm motivated by trying something different.  Seeing something different.  Personal growth if you want to call it that.  I'm not really motivated by money (despite owning my own business since 2008 and being in sales most of my life).    One of the best sales months I ever had was due to the promise of a exotic dinner at a restaurant I had never been to but only if I met a certain goal.

Money, like the computer or a car...or even my bike, is just a tool to help me achieve what I really want to do.  Which is to move and travel and see what is over that next hill, what is around that next bend.  The more I think about this...the more logical it becomes to me. 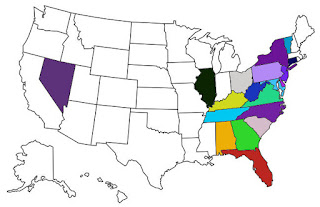 I may have grown up in Pittsburgh, PA but I went to school in Erie, PA and Slippery Rock, PA.  My family likes to joke that when my brother and I turned 18 , my parents said "We love you, now get out."  I guess those travel roots were put down early.

After college, I moved south as soon as I could and have spent time in Charleston, SC.  As well as living briefly outside of Savannah, GA.  It was not till I moved to Charlotte, NC (where I had a job that taught me something new everyday and often required me to travel through the south) that I was fully affected by the travel bug.

Since then I've been able to travel to the various islands in the Caribbean and a nations in Europe, Asia and South America.

I've traveled to New York City twice, Chicago twice, Las Vegas once.  I've touched down in nearly every state that touches the Atlantic Ocean.  Sue and I are planning on going back to Las Vegas sometime next year (a place she's never been) and our first trip to New Orleans.

If things work out in the long run, then Sue and I will be buying an RV and traveling the US and Canada once we retire. Well I may not be a fan of the idea of getting a trike or a Spyder, the reason I'm even considering it is because Sue wants even more stability when she rides with me.  Plus she knows that I would never ever forgive myself if I were in an accident with her on back. 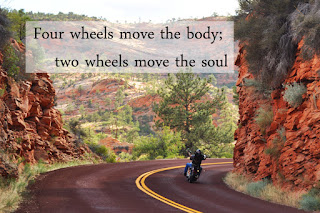 I just have that travel bug, that need to see what is over the next hill, and my bike allows me to explore all those wonderful back roads near me.

Who was it that said "Four wheels move the body, but two wheels move the soul"?  They were certainly right.  As I look back on my "biking life" I've found that I've been happiest when I have a idea of where I want to go, but it's someplace that I've never been.  It's finding that small mom and pop cafe, or the old cemetery in between point A and B that intrigue me.  Sometimes getting there is more interesting than the final destination...and yes, I know what a cliche that is.  That motivates me to ride, it's just a shame that all I seem to do is ride back and forth to work, so is it any wonder why I'll chose a different path in sometimes?

Even the TV shows I enjoy watching (and I hate TV) are geared towards the exotic and unusual.  Travel shows, history and education predominately.  I used to think that one of the reasons that Jack Kerouac was my favorite author was do to his spontaneous prose, which is basically how I try to write...capturing that feeling of the moment without worrying about how it is structured.  Now in the light of this revelation, I can not help but wonder if it was his nearly neurotic need to be constantly in movement?

After all, the world is always a more interesting place 50 miles from where your at.
Posted by The City Mouse in the Country at 8:42 AM

Curiosity is my motivation. As a child I always wanted to know what's behind the next corner... As we are becoming older (if not wiser) an RV wouldn't be the worst choice, I like to imagine it with a scooter attached ;-)

Travel by RV is a great way to see this country and you could put a little scooter on the back of it for running around when you park for the night.

I love the idea of travel, but every time we travel we come away feeling we aren't good travelers. We miss our own bed, crowds annoy us, etc. Maybe we just don't travel to the right places yet.