I have been trying to help a co-worker decide on which motorcycle he should buy.  This will be his first motorcycle and he has never ridden before.  Luckily he has got a bit of a brain in his head and is getting endorsed first, buying the proper gear and is listening to those of us that do ride nearly every day.  He's already changed his mind about getting a huge cc monster although I can't talk him out of his desire for a street bike.

In my thinking a 250cc or 400cc motorbike or scooter is all he needs for a year or two.  Your going to go down at least once while learning and a old beater would serve his needs.  Burgman's are relativity cheap and plentiful for example and would provide him experience in handling a two wheeled vehicle.  Now don't misunderstand me, I love my Burgie and really don't have any complaints about it but I am a realist as well - he needs to learn and the Burgman is a good bike to do that on.  His heart however, is with a sport bike.

My first ride was the Zuma 125, it met all my needs at the time and was a fun little bike, it will always have a place in my heart, but his quest got me thinking.   What's next for me?

I've always been attracted to the odd and unusual and I can't see paying an extra 10K just for a brand name.  Plus, they are a dime of dozen, so Harley's are pretty much out of the picture.  I do like the Mana 850 by Aprilia  They also created a 850cc scooter with pretty much the same body, or at least it appears that way to my untrained eye.  I fell in love with the style of their bikes, all smooth refined lines and Italian sophistication.  I've only seen one or two on the streets and that appeals to me. 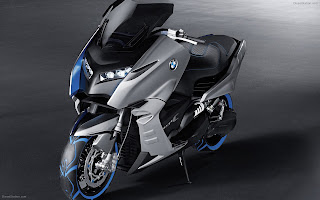 BMW new Urban Mobility Vehicles also appeal to me just due to their style.  The fact that they are BMW's - which generally means good engineering that is built to last.  The reviews I've read are generally good  and frankly, this is probably the only BMW I will ever be able to own other than a matchbox car.  Both of the current models are being geared towards city dwellers, answering their concerns about  the crowded roads and diminishing resources of city living.  It's a gamble and interesting marketing but could pay off huge for BMW in the future.

When I first started looking at buying a "real bike" and not a scooter various friends of ours tried to steer me to the Triumph Bonneville's.  I have to admit that I'm drawn to not only the fine lines of this classic bike but also the history of them.  It's a damn sexy machine.  The only reason I'm not riding a Bonneville today is that they were, at the time, a little to powerful for me.  I could however see myself on one of these very easily.

Susan, my long time girlfriend, and I have discussed the possibility of getting a trike or a trike conversion kit to allow her to ride with me.  While I do love the idea of her putting her arms around me as we go through the twisty's I'm not really sold on the idea of a trike.  I would eventually like to travel with her to parts unknown, and some trikes are built exactly for that comfort and ease of travel.    I have seen some models out there that appear to be little more than cars missing the roof and steering wheel and that to me seems to be defeating the purpose.  I am not a fan of Can-Am, although that has more to do with the style of the bike than anything else.  I've not seen many on the road which does make it "unique", nor have I really looked at the bike up close.  Does it have lots of storage?  How does it handle?  Frankly I don't know and need to learn more about them.

Piaggio has the MP3 series of bikes. These are three wheeled scooters and have lots of interesting advantages, such as being able to stop and not put your foot down. They are still rare on the roads and is a much smaller profile than the Can-Am's.  Both of these bikes offer stability and safety.  The MP3 is a smaller bike (maxing out at a little under 500cc as compared to the 900cc of the Can-Am) and would get gas mileage similar to what I'm getting now.

A motorcycle sidecar seems to be more honest to me.  Ural Motorcycles used to make motorcycles for the Soviet Military.  Did I mention my enjoyment of odd and unusual?  My love of history?  The idea of traveling here and there with a sidecar has a romantic element to it as well.  Ural prides itself on its ability to take to take what ever you through at it.  Sidecars however are also inherently dangerous and many people dislike the idea of riding mere inches above the road surface. The concept appeals to me, the reality might not, again...more research and test drives are required.

I'm not in the market for a new bike though.  I am very happy with my 07 Burgman and I'm not ready for a new bike - even if I could afford it - and frankly who knows what will be out there when I am ready?  I am however keeping my eyes open, something may fall into my lap one day, for now however...I'm a Burgman rider.  Another Burgman could be in the future.  You never know.

Posted by The City Mouse in the Country at 10:20 AM

The Honda Integra is an interesting alternative. While it is technically a "motorcycle" because of how the engine is mounted, the bodywork adds the advantages of a scooter like your Burgman. For someone wanting to commute or tour, being able to get some protection from rain, wind and cold is always helpful.

Thank you Chris, I learned something new. :)