National Ride to Work day and Helmet laws...why the debate?

Yesterday was National Ride to Work day and although it was good to see various motorcycles out on the road, at my workplace alone there were at least 5 bikes of various types...including mine.  I was also disheartened by something I saw. 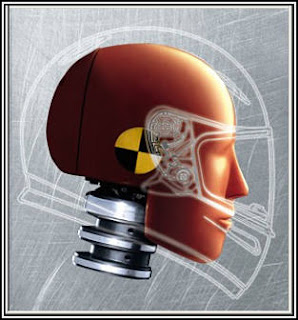 When your riding in Florida its always a battle between comfort and safety.  Normally I start work at 4 PM, which means that I ride in during the hottest part of the day.  I love my motorcycle jacket and know it's there to protect me in case of incident or accident but it's also a mobile sauna at red lights.  I unzip it some to help move the air about, I've considered removing it and only wearing it home at night were the reflective tape and stripping will make me that much more visible.  A lighter jacket is always an option but frankly this is not a priority.  I would rather suffer for a hour or so in the heat than be unsafe for I know it only takes a second for me to go down.  All the gear all the time is more than just a saying, it should be a way of life for any biker.

What I will not compromise on however is the helmet.  Lately the local news has been full of stories of how helmets save lives.  How they reduce medical costs, how they can save the state millions of dollars and how wearing a helmet is a matter of choice.

I understand that I'm still a "noob" when it comes to riding.  I don't have years of experience or thousands of miles under my belt.  What I do have is my background is in science, education and engineering.  For several years I was the technician that was actually out there testing the concrete, the asphalt, the metal that lines the roads that you drive on.   I'm here to tell you something.  Your head is much, much weaker than those materials.  To not wear a helmet strikes me not as as idiotic but also suicidal.  For these reasons I wear my gear all the time.

So when I read a quote like this - taken from the ABATE of Michigan's website - my blood boils. "ABATE's position supporting ADULT CHOICE for Michigan's mandatory motorcycle helmet law DOES NOT seek to eliminate the use of motorcycle helmets. Although ABATE questions the MANDATORY nature of a law that forces the usage of self-protection equipment with questionable benefits, it is the use of DOCTORED statistics, the misrepresentation of facts, and outright lies used by the safety-crats to support their position which is especially bothersome."

This shows an ignorance of science and a level of hypocrisy that boggles my mind.  Why hypocrisy?  Because the same organization wishes to ban the cell phone.  In fact, they cite figures from the Centers of Disease Control and the National Transportation Safety Board to support the ban.

Guess what...that is the same group of "safety-crats" that wish to make helmets mandatory.
The CDC is not known for "outright lies" or "Doctoring" data. The fact that ABATE is using such inflammatory language indicates that their argument is not that strong to begin with. Or perhaps it says something about the divisive nature of American society as a whole.

Now I will agree with ABATE and other groups, the Helmet itself is not going to prevent the accident! The best preventive medicine is training, experience and a awareness of your surroundings. However the argument that money spent to enforce the helmet law could be better spent on training and education, to me at least, is found lacking. Training and education is going to save your life (it's help me avoid a deer for example) but accidents are and will continue to happen. For these groups to not support a mandatory helmet law seems foolish to me.

The argument that helmets could be made safer and better is a legitimate argument.  However the way a helmet is tested is again based on solid scientific principals.  To argue that the chin strap could somehow strangle someone in an accident is most likely a urban myth.  To argue that a helmet is somehow going to make things worse in a accident is not based on facts.

I understand the idea of freedom.  That some people bristle at how the government interferes with our lives, etc.  I do understand it and this is not a political tract.  It's not meant to be.  This is a plea to all bikers, be smart.  Wear a lid.  Come home to what matters.

Posted by The City Mouse in the Country at 9:32 AM

I like what you said about bikers should be smarter and wear helmets just because its a good idea. I'm not a huge fan of mandating something by law, but bikers do need to understand the realities involved.

It amazes me sometimes how people seem to believe in something for all the wrong reasons and that nobody can tell them anything otherwise. I wonder sometimes if mandatory continuing education or refresher courses from the motorcycle safety foundation might help.

One argument I heard against the use of helmets was that the rider needs to be able to hear what is going on around him. My problem with that is that a lot of them couldn't hear much beyond the sound of their own pipes. But that's a whole different argument.

I'm all for personal liberty, but a little common sense would help a lot of potential head injury victims out there.

I've been riding for a long, long time and while I will always recommend ATGATT (especially for newer riders) I don't always follow my own advice. But what I will not do is ride without a helmet, whether it's required by law or not. Road rash will hurt like hell, but it will heal - brain injuries do not.

As a head injury survivor who lives and deals daily with symptoms that changed my life forever, I will never understand how anyone wouldn't want to minimize going through this. This is not an experience I would wish on anyone...and, I'm lucky. I still have a short term memory, am physically able and active. Most of those I went through rehab weren't so lucky. I know you can't cure stupid. And, I too, am not crazy about over regulation, still...

Well written and from my point of view a very sensible post.