Epic adventures in your backyard

A good traveler has no fixed plans, and is not intent on arriving. – Lao Tzu

I decided I would have a little fun with this post.  Over the last week or two nothing really "motor scootering" has happened.  I go to work, I do some short jaunts here and there just to get out...my weekends have been busy with work, or going out with the girlfriend (for example we spent all day Saturday with friends on their boat) and doing what ever it is that normal people do.  Sadly that has not included that much "recreational" riding.  A weeks worth of solid rain and thunderstorms have not helped my riding situation.

So I thought I would show you where I live in pictures...at least some of the more interesting things about Zephyrhills, Florida.  After all where I live is famous for it's water, it's skydiving and an interesting; although morbid, story about a man that lived with a corpse for several years.  Z-Hills, as the locals call it, has a  full time population of roughly 13,172 people (reported in 2009) which - this being Florida - goes up to 85,000 in the fall and winter.  So it's practically a ghost town now.

With my camera tucked safely away and with a song in my heart I head out on a local epic adventure showing you the sites of a small town in Florida.  I figured I would start with what were famous for and then just stop when I was done.  Not really in any sort of an order.

a) Zephyrhills Water - part of the Nestle group of companies the limestone springs in the are produce a nearly pure bottle of water.  However much of the water the company sells comes from springs not only in Florida but other areas as well.

b)  Muffer man  - One of several hundred similar advertising logos found in the US, what is really interesting is the website Roadside America has a tracking map of sightings.

c)  Skydive City - Z-Hills has the unofficial reputation as being the "Skydiving Capital of the World" which is due to our weird geography, we live in one of the more elevated parts of the state (in fact the 6th highest point in all of Florida is just minutes away) which creates interesting and almost constant winds.  The warm weather allows for jumping nearly all year around as well.  I understand that a mile up in the air you get to see not only the Gulf of Mexico but the Atlantic Ocean as well as the cities of Tampa, Orlando and the various surrounding lakes.  My girlfriend has jumped seven times so far.  I will stick to my two wheel thrills.

d)  Airport Museum - The local Airport has been open since 1927 and has a long history of serving the military as a paratrooper and pilot training base.  During World War Two the airport hosted heavy bombers, various fighter planes like the P-40 Warhawk and famed P-51 Mustang.  Various restoration work on these and other planes occur at the airport and a C-47 transport plane from the same era is nearly completed. 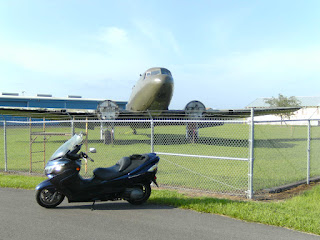 e)  Train Depot - This restored building, dating back to 1927, now serves as a small museum focusing on local history and the importance of the railroad in the growth of the town, and Florida as a whole.

f)  Twisty Treat - I scream, you scream, we all scream for ICE CREAM!  The first time I came across this ice cream shaped building (and their seems to be several in the Tampa bay area) I thought they were pretty cool - no pun intended - and part of Florida's history.  In fact, it's part of a modern day marketing plan.   Although it is nice to ride the bike out on a hot summer night and cool down with a dollar cone on Wednesday nights. 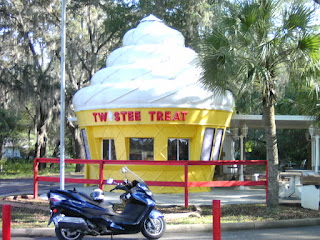 And there you have it.  The town that I call home.  My heart will always be in my home town of Pittsburgh, PA.  My young adult life in Charlotte, NC and my soul will always reside in Charleston, SC.   But for now, my home in here and you know, it's not that bad of a place.  I guess this would be a good place to... 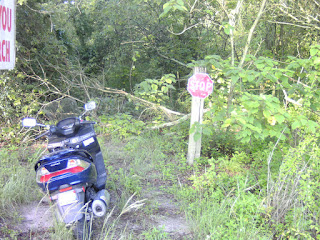 Posted by The City Mouse in the Country at 10:02 AM

It's always an interesting exercise to go out into your own town and try to see it like a tourist would. Every time I've done it I've found out something new about the place I call home. It's a lot of fun.