Some classic Chuck Berry to play while your reading.

Now it's a lovely day, the sun is shining but the heat not struck us yet.  The humidity is low.  What a great day to simply go...somewhere.   Anywhere.
I got some 20 to 25 years left in my working life, but I've always said that when that time came I was going to climb aboard a RV and avoid the highways.  See what's down that dirt lane to the left and find out if their really is a waterfall down "Waterfall lane."  Perhaps part of the reason I wanted a bike like was Burgie was to get a look at that life.

To "retire" a bit early.  Touring was always in the back of my mind.

I did have a bit of a agenda on my ride though.   I wanted some pictures of some of the places I found while on my Zuma.  For some reason the camera phone would not download the photos.  This time, I brought the camera.

I was curious to know if the larger Burgie would lose speed up one the steepest, toughest hills in all of Pasco county, Florida.  So I gunned it up to the legal speed limit and....... 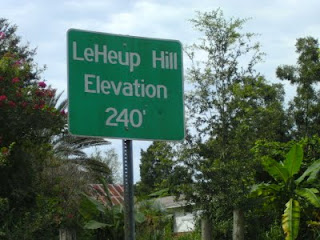 the ride up was really disappointing.  My Burgie did the climb like it was nothing.  Let me tell you, nothing prepares you for how cold and windy being a total of TWO HUNDRED AND FORTY FEET ABOVE SEA LEVEL truly is.

I swear I saw a hungry penguin checking me out for dinner.

All joking aside though, I can see why people tour on a motorcycle.  It's a slower pace of sorts, your more connected to the road and without the distractions of music, cell phones and air conditioning...you are left to your thoughts.  The bike becomes a part of your body, leaning into a curve just so...the smell of flowers and oranges on the side of the road.   The simple joy of driving through a old canopy of trees with the Spanish moss hanging ghost like. 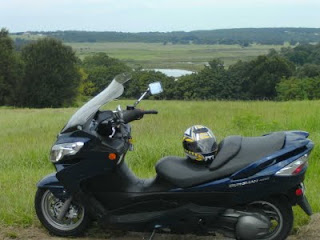 Stopping to take in a view because you can.  Not because someone built a concrete slab into the side of a hill.   Finding that out of the way cafe or winery.   They say the cyclists "SEE" all the time.  I know that's not just not for safety but for the soul.  Where as cars are built for the highways and to get us from point A to B.   Life on two wheels feeds the soul.

A historical marker on the side of the road can not be read at 55 mph very well.  It needs you to pull over and take a moment to actually read.   The idea of a town full of freed slaves making their way in the Deep South is an interesting story...one that this rider would have never have known about unless he stopped. 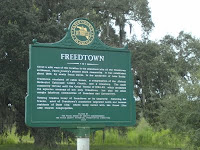 So yea, stopping for a moment in this fast paced Internet driven world where time is not measured so much in minutes anymore but Megabits per second...seems like a radical idea.  It's worth it though.

I'm starting to understand why people ride, and it's not always for gas savings.   I'm wanting to get out again, to just ride in a direction...to chase the sunset or just go to the left.  All roads lead somewhere.

I did pass one lawn sign in someones yard, I wanted to get the bike next to it for a good photo...but I did not wish to ruin their yard by parking my bike in it even for a moment.   I read the sign and smiled..."Not right now there isn't.  This is a perfect moment."

Posted by The City Mouse in the Country at 2:02 PM

What a great way to explain why you're riding. Every rider can relate, scooterist or "biker".

And not being familiar with your surrounding I truly believe that being on 240 ft elevation things can get pretty hairy. Be careful out there ;-)