Sure I could tell you about my new gloves, how they fit...look...about Kevlar knuckles and two way stretch knit.  Are you sleeping yet?

Alright then...how about the term "pre-curved fingers."  If that doesn't turn you off then frankly I don't know what will.

What I do know is that I needed a pair of gloves and up until this time I've not been riding with any on.   Truthfully I never really thought about it.  Helmets, jackets, and long pants are a given and part of safe and sane riding to me.  Frankly though I never really gave a thought to gloves.

I don't like wearing gloves.  Sure in the winters of my home state of Pennslyvania they were a given.  Thick things designed more to keep my hands warm.  You weren't expected to do anything in them except hold the hand of your love, hot cocoa and/or coffee and make the occasional snow ball. 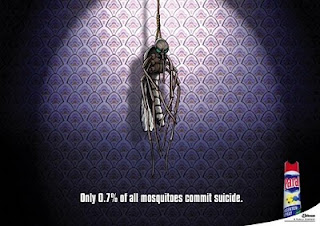 I worked for several years as an engineering technician where sometimes I had to have work gloves on.  The second I was done with my task, I had to strip the damn things off.  So I was a little weary of getting riding gloves despite the fact that they protect my hands in case of an accident or even the rare stone or insect that decided life was worth living anymore.  Honestly if they were not required for the safety class that I am taking soon then I don't think I would have ever got them at all.

But need them I do and being the uber-geek I am I started to do research.  What I wanted to know was why one pair was under 10 bucks and another pair $199.95.  I figured that I could find a good pair that I liked for under $30.  What I learned was simple, it really did depend on what I wanted and what I was doing.   I figured I was doing mostly highway commuting, and therefore needed something that would keep my hands cool, be comfortable for extended periods and generally safe.  While the Kevlar might be great for somethings, I had no plans on catching bullets while riding.  So we can knock those out.

Leather gloves have been serving bikers well for years, but can be hot and pricey.  In fact, someone suggested getting a pair of Bell BMX gloves.  They are padded and designed for BMX riding, so they are tough and made to protect the hand if the rider goes down.  Even vibrations would be canceled out.  Cost is about $15.

Everything I was looking for.  Problem was, they didn't fit right.  They were tight and just didn't seem like they would let my hands sweat very well.  So again, where does that leave me.   I was shocked when I would come across the gloves I liked.  If fracking Wally World of all God Forsaken places.

They were Motocross style gloves.  Gel padding in the palm, reinforced stitching and Kevlar knuckles - always good to have in a bar fight.  So I've been riding a bit with them, my hand feels comfortable in them with a better grip than the bare skin of my hands. If I drop my hand the air flows through them pretty well and wipes the sweat away. 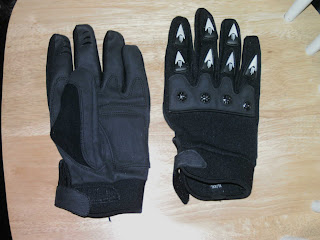 The fingers are pre-curved and have pads to clean the visor off quickly.  So far I'm happy with them.  In fact the biggest issue I have is that they are black.  I would have like to have a little more color in them since I am a fan of being visible.   At $20 they didn't break the bank account either, part of Gearing up is paying out of pocket for the helmet, the gloves, the jacket...but over months and several hundred if not thousands of miles they will pay for themselves.
Posted by The City Mouse in the Country at 1:28 PM

I can't figure out the cost angle either. I need to fight cold and rain. I settled on some Icon gauntlets that only cost me about $70. They work as advertized, so I'm happy. My summer gloves that I picked up at the Harley dealer for $20 are all leather with layers and padding for protection, and perforations for airflow. I love them. I can't ride without gloves. It makes me feel naked.

I started off 10 years ago with very similar gloves and they were fine at first, but then experience taught me a valuable lesson. I wiped out in the mountains of northern GA. The cuff of my Joe Rocket MC jacket was velcro'd over the cuff of my gloves . . . when I went down & slid on the pavement, the sleeve of my jacket just slid up my arm exposing my arm to the pavement and left me with no skin from my elbow to my wrist. What would've prevented that from happening was wearing a more protective glove like this: http://www.joerocket.com/catalog/index.cfm/238/435/Gloves/Speedmaster_8.0_Glove
that you can tuck your jacket cuff inside the gauntlet of the glove and tighten down the glove with velcro strap. Sure you can wear gloves like yours and probably not go down, but when you do & your jacket rides up your arm like mine did, you'll wish you had more protection to prevent that from happening. Experience is your best & worst teacher. I learned a lot from my experience . . . the value of my skin!