I feel worse than stupid.

I am downright mad at myself.

I went down yesterday.  Not hard, not in traffic and in fact if your going to go down it was in the best place possible.   I went down outside my driveway.

Somehow, I'm not sure how, as I was pulling out of the driveway on the way to work I lost control.   I think the throttle stuck some or I hit a lip, but I could not regain control, hit my neighbor's stone border on their flower garden and down I went. 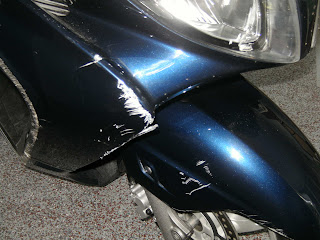 I'm more angry over the fact that my pure and beautiful bike is now scratched up.  The chrome on the the muffler is scuffed, a bit of cracked plastic in the front.  I know damn well it could have been worse, all I have is a minor scrape on my arm and a scraped knee...I've had worse chasing the girlfriend naked around the house.

No, what bothers me is that I didn't check things first.  Did I have enough clearance?  Was their something n the way?   What did I do that caused me to go down in a heap?

I know that every biker goes down at least once.   It's what you learn from it that counts.  I would rather go down from being stupid in my driveway than being stupid at 70 mph in the middle of a highway. 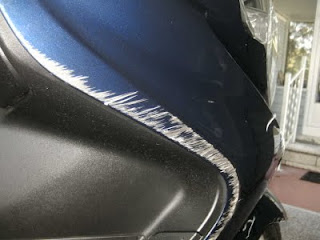 The question in my mind is now, what can I do to repair the damage and make the bike look newer?  What did I learn from this?

Oh yea, I rode in.  Nervous as hell, but I rode into work.  I'm not going to let a little bump scare me off of riding.   But I will let myself learn from this.  I will be just a tad more careful.
Posted by The City Mouse in the Country at 12:52 PM