Somewhere yesterday or the day before I tripped the 1000 mile marker on the Burgie.  It happened without fanfare, no angels descended from Heaven to mark the occasion although there were donuts at work and cupcakes there the next day.

I suppose 1000 miles is not really that big of a deal, I commute 70 miles roundtrip each day and that number adds up pretty quickly.  I'm averaging over 64 miles per gallon and have spent under $100 in gas (I think as I've not done an official count).

For me however it is a big deal.  When I rode my little Yamaha Zuma 125 back and forth and here and there they were short trips, under 35 miles total usually.  I got experience and learned to ride...but it's a different type of ride.

Maybe it was just me but coming home tonight I felt "locked in" to the bike, the steering column barely seemed to move as I took the corners at 65 miles per hour on my commute.  I really enjoy riding at night.  It's another world, less traffic to worry about it's true...but I am even less visible on the road.  My commute involves long lonely stretches as road as well,and Lord forbid if something should happen, it would be a long night till someone came along.

I put these thoughts out of my mind though.  Enjoying the night air and the croaking of frogs off in the distance.  There is something ethereal about being the only one on the road, the whine of the engine and the light of Venus above.

There is one major issue I have however. 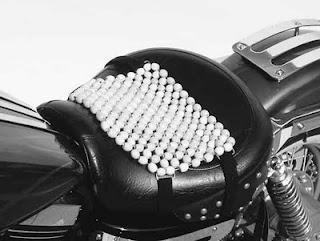 That strange condition that affects some riders...where your ass just is not comfortable on that seat no matter how you move or what you do.  Everything from adding and subtracting foam to the seat to get a hard wooden beads to sit on has been suggested to me.

I've seem something similar to the hard beads in cars but have not really tried it, but people swear by it.  It's also been suggested that since I'm in Florida something like a sheepskin cover for the seat might help as well.  I hope to get it covered later this week or next.  No matter where I move my skinny bony ass I just can't seem to get to comfortable.

I also realized that I am doing what I sent out to do.  With the exception of one day, where it looked like rain, I've driven the bike in every day.  I'm a 2 wheeled commuter.

Problem is, I'm not having any fun.

Sure I could blame the seat, the fact that I own my own small business which eats up time and work a goofy ass shift at my regular job.  I could do all that.  The problem is that I'm just riding back and forth to work.  I want to break out of the rut and do something different, ride somewhere different.

I break up the route I ride a little bit, twisty roads one day...the highway the next.  I want to simply ride and do something different.   I think that's part of the motorcycle mystique...that sense of freedom.

I am feeling the need to just ride.   Somewhere.   Anywhere.

The weird thing is that before I started riding I could not have explained this feeling.  I would simply say "I need a vacation" and go hiking in the woods or take a couple of day and do nothing.  Now I just want to ride.
Posted by The City Mouse in the Country at 9:37 AM

Whenever we get our schedules ironed out, I'll take you on a ride that you won't soon forget that will fill that void.

You could check out an Air Hawk. For visibility from the back, check out what Admore Lighting auxiliary lighting (modulating brake light and sequential turn indicators).

@ Gary....Sorry. Just feeling a little stressed and whiny. Yea I been looking forward to that ride. :)

@David...Thanks for the info on the Admore Lighting. Looking it over it sounds like a good idea.