Sometimes the simplest solution is the best - the Drink Holder .

Tropical Storm Debby has been just sitting in the gulf for some time, which means days and days of rain and wind...making riding dangerous if not down right impossible.  Their is an old saying about being ugly but not stupid and I'm not the latter.  I've been lucky enough to avoid most of the damage caused by the storm, being inland and "in the highlands" so to speak.  Some photo's of the damage can be seen here.  My heart certainly goes out to those affected.

I figured however that I should do some work on the bike that I felt comfortable with.  Mitch has some wonderful video blog entries about simple maintenance that I could do, thus I cleaned but did not replace the air filter.  I also decided that I would add a cup holder to my Burgie.  There were a couple of ideas that I came across.  Burgmanseats.com offers a simple cup holder for about $20 dollars.  A very simple cup holder could be crafted together by following these directions:


There are also various cup holders that require a mounting bracket.  I had a lot of different options before me but I decided the take the path of least resistance.  After all it get hot here in Florida and if I planned on taking longer trips, then I needed a place for water.

If I followed the directions on the video then my cost would have about $26.82 (for the cup holder + shipping costs from Wally World since the local stores don't carry that type of cupholder) then an additional $10 for the velcro from JoAnn Fabrics.  Total cost  $36.82.  I thought there has got to be a cheaper way!  No that does not include the tile.

I didn't need to spend any more money than I already did. The Velcro strips would come in handy. You see, I already had the solution in hand.  Once upon a time before drink holders were standard in cars you had a plastic thing that attached to your window.  I realized I could take one of these old things and attach it to the bike.  A piece of Velcro could be cut and attached to the "crook" and to the arm to keep it in place.  I wanted to take the bike out in my hood to see if the holder would interfere with my driving, my leg and if it would hold a cup, a bottle of water and a can of soda.  If they did then I would cut and attach the Velcro and be good to go. My little ride proved my idea was sound.  It didn't interfere with the bikes operation at all.  So lets begin!

First I had to cut the Velcro to fit the cup holder.  This tends to be sticky and had to be trimmed to fit the dimensions of the cup. 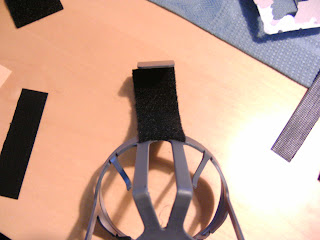 Then I had to place the other side of the Velcro onto the bike.  I had a spot in mind and it worked out rather nicely.  Again some trimming was required.  My main concern was in the "crook" area where the cup holder would hang. 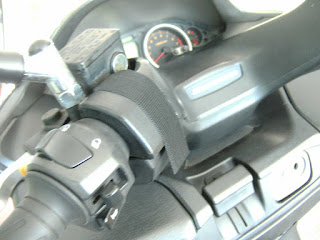 TADA!!!  The final product.  Total cost was under $5 for the Velcro and about 5 to 10 minutes of time to put the whole damn thing together.  Now I don't have an excuse for a longer trip. 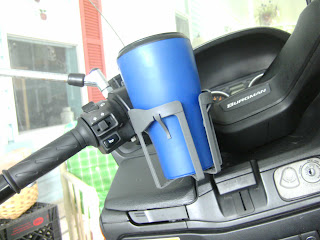 Posted by The City Mouse in the Country at 5:44 PM

Great idea. If burgman owners are not inclined to use a sticky adhesive on their tupperware then a small piece of flat black contact paper/vinyl could be applied first and then the gooey velcro. The vinyl could be removed much easier and cleaner.

I looks like that it's a 650 in the video - a 400 doesn't have room there - that's where the fuel cap is. I do like the handlebar idea - beats the way I used to transport the Sonic Route 44 drinks.

Your correct my Anonymous friend - love your sayings by the way - but the video got me thinking. I was originally going to try the "video cup holder" on the side of the bike, changing the design slightly. The cup holder I used seems to be working very however.