Serendipity:  finding valuable or agreeable things not sought after.

This last saturday I experienced both of those feelings.  Susan and I started riding two-up for several reasons, but one of the main ones is she wanted to explore the local area with me.  As part of the Equinox to Equinox rally I was visiting old cemeteries and  traveling all around the back roads coming back home with interesting stories and pictures of what exactly was out there.

We agreed to go exploring, planning to take a two hour and 60 mile ride to a few places I wanted to mark off my list.  The courthouse in nearby Dade City, the Muffler Man, a couple of cemeteries.  I had heard of an old ghost town nearby...well not really a ghost town but a town that used to have over 1000 people living there that now had less than 100, yet somehow managed to preserve it's early 1900's buildings.  As fans of history we had to see this! 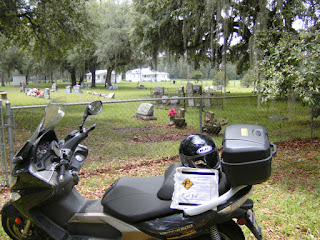 First however we had some errands to run and breakfast to eat, so we climbed aboard Kimmie and took off.  We had no issues, not a care in the world as we started off on our journey.

Then Susan started to tap me on the shoulder, she forgot something at the house.  We turned around.   About an hour later we left again.  And turned around again as something else was needed or forgotten.   Another hour passes.  We are now into the heat of the day....to hot for Susan to ride.  I'm on my own.

Fuck it, where does this road go anyway? 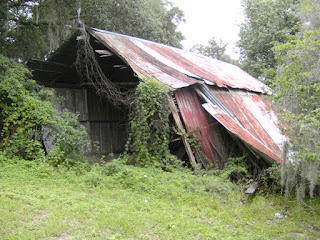 I turn and start to head down a road I've never been on before.  It's a nice 2 lane road, heading into the wilderness that is central Florida.  I ride through farmland and past citrus tree, there are more than enough twisties to make it interesting.  I am the only bike on this road,  and I realize it's a hidden gem as I putt along at about 40 to 50 miles per hour.  It's a great road, no potholes, the curves well marked out.

I pull off here and there when something catches my eye, an old barn falling down or a baby calf grazing at the fence line.   I try to entice it with some flowers picked by the side of the road but it wants nothing to do with some strange man riding a noisy machine.

I ride some more, the smell of lavender off in the distance.  I turn a corner and see an old familiar sign.  I'm in the Green Swamp now.   The paved road gives out to hard scrabble but it's nothing that I've not ridden on before, Kimmie and I move forward, till the road were on dead ends at a small but well maintained little church and graveyard. 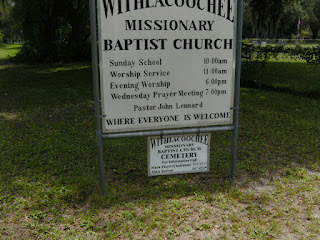 I ask permission of the dead to move my motorcycle close to the graves and take my photo.  Taking a few minutes to watch the various butterfly's float through the air.  It's peaceful here and I can understand why the Baptist Church seems to be in the middle of no where.

Off again now....through twists and turns heading home or at least in that general direction.  I cross an old wooden one lane bridge.  I worry about stopping in the middle of it, but I hear no cars...in fact I hear nothing but nature and the gurgle of the water below me. 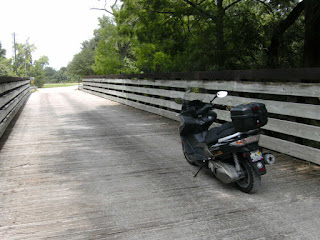 I know now that I have to return to this road, this hidden gem.  I hope to bring Susan here, she would love the quiet and the view.  The flowers on the side of the road in their purple and golden glory.  I'm tempted to post something to the various forums I belong to.  Letting other bikers know about this find, this amazing remarkable road.  Then again it's my secret...and I'm reminded of the legend of  Brigadoon. 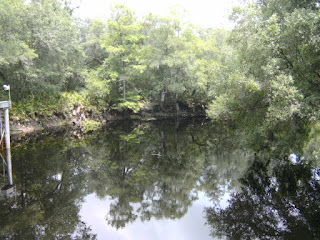 Posted by The City Mouse in the Country at 7:45 AM

These kinds of rides are the best.

Awww the magical land of Brigadoon - don't share this road, keep it to yourself & take Susan. Everyone needs a magical place to ride to. Hope you get back there soon.

Rob, that E2E rally is such a nice idea. What a great way to get out and see things you would otherwise never see.

DAR - I was wondering if anyone would actually catch that reference. After all, Brigadoon appears only once every 100 years or so.

David - the whole idea behind the rally was to get out and ride, and I'll admit that I've used it as an excuse to do exactly that. :)

We often find ourselves wandering the back roads on two wheels with no GP for assistance. As long as we point the bikes in the general direction of where we want to be we'll get to a familiar road at some point.

Even better when you find the deserted ones with some twisties.

I love rides that surprise me. The frustration of the beginning I wouldn't like so much.

Foggy days always make me think of Brigadoon. It has been most often when riding on misty moderately foggy days when I've had the experience of wondering if I've slipped into another dimension. The world seems to open up.

I enjoyed this story so much!

Oh the special delight in discovering a place like this whilst out and about!

I had a place like this where I lived before. Glad you found this one for yourself!

Robert - I once was on a moto wander looking for a particular road that is full of twisties and I miscalculated and ended up getting lost down some country roads, which I thoroughly enjoyed, but now sadly can't find because I don't have GPS. In my case it was how do you find a place that you got lost too without knowing exactly where it was - that indeed is my Brigadoon ;)