Okay,  I admit to it.  I'm a bit of geek.  I enjoy a good book and good food and great conversations.  Nothing makes me happier than great music and a cheap bottle of wine.  Which is why riding surprised me so.   Frankly, I never would have thought that something so simple as going from point A to point B would give me such joy.  Or perhaps it's all the Point C's, D's and E's that are in-between...and not necessary in any resemblance of order?

Due to a variety of circumstances, which some of you may know about, I've been ordered not to ride for a bit.  So here I am...reading other people's blogs, watching the odd TV show and You Tube videos and review's to keep me entertained.  Frankly I don't know how my Northern friends can put away their bikes for months at a time...I'm going nuts after just a few weeks.  I miss the physical act of riding...and until I'm released I'm "stuck between stations."

So I thought I do a little review of what I've been watching.  Most of you have probably already seen these shows but if not they are mostly available on Netflix, You Tube or Hulu. 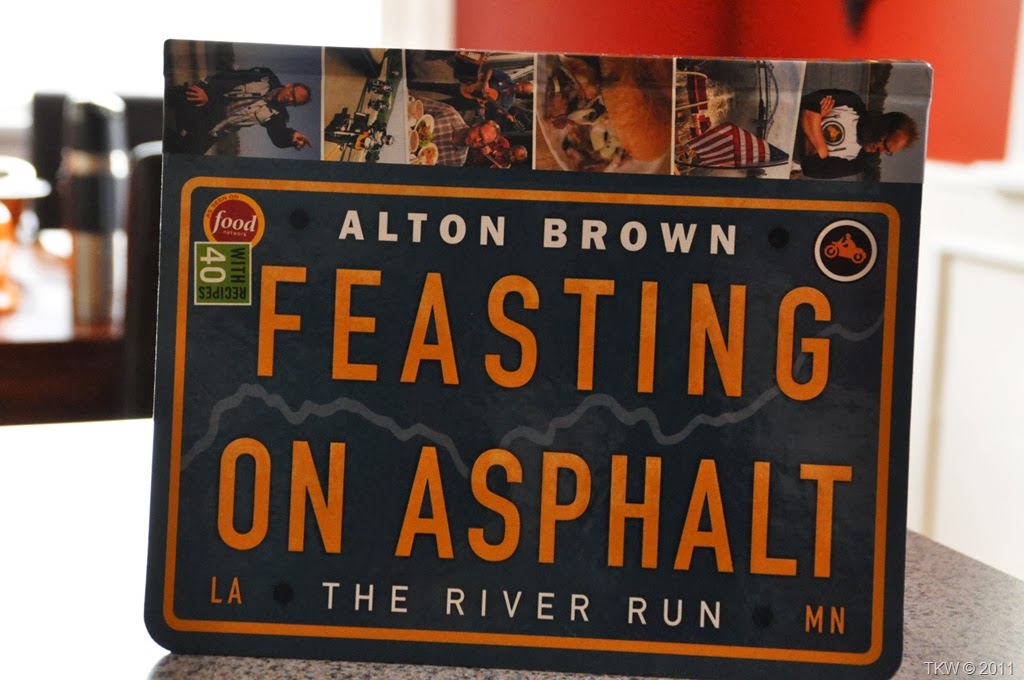 Alton Brown's "Feasting on Asphalt" comes to mind.  I've not seen that show in years (the show originally aired in 2006) and I enjoy Alton's little mix of silliness, interesting cinematography, good food and friends mixed with his unique take on history and travel.  Sadly this is only available to You Tube and is broken up into several pieces.  Still though, if you don't mind watching seven minutes here and ten minutes there its a good look at the diversity of the United States although I personally would have liked to have seen the whole series without interruption.  The first season he and the crew cut across the American south towards California.  In the second they traveled up the Mississippi river. 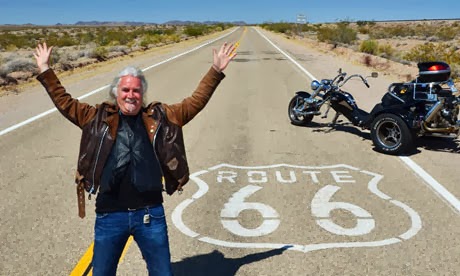 Also available on You Tube is Billy Connolly's Route 66.  It was a four episode series done for British TV several years ago (2011) and follows the Scottish Comic as he travels the "Mother Road" from Chicago to California.  Unlike "Feasting" this series is available in full and without interruption.

It has a very relaxed feel to it and Connolly seems to be enjoying himself immensely.  One of my favorite moments is when he relates a story about a house of ill repute outside of Chicago.  It seems that the house was built on a rail spur between two counties.  When the girls and their patrons were tipped off about a possible raid, they would push the house from one county to another...a image which causes the comic to laugh so hard that he can't continue the story.

I've also been watching The Long Way Round and The Long Way Down (both of which are available to Netflix).  I have to admit that I didn't particularly care for the way this series started.  After all, there are notable examples of people that have traveled around the world on foot or by bike without the support network that Ewan McGregor and Charley Boorman have.  Yet because McGregor is a well known and famous actor they get great gear and new bikes from BMW.  They even manage to travel with their own doctor and security for part of the trip.    Yet, despite all of that....once they are left alone and off in the wilds of Siberia or Mongolia or Africa they seem to relax.  Charley Boorman seems to be a fun and entertaining guy that you want to spend a night drinking with.  Both of them really seem to enjoy being out in the world and their enthusiasm for meeting new people and seeing new things appears realistic.

Generally speaking I enjoyed Long Way Round more than I did the second version of the series where they traveled from London to South Africa.  Plus I have been to Almaty, Kazakhstan and have been in the same spa visited in the series.  So that was pretty cool.

At this time, I'm not sure when I'll be allowed to climb back on a bike.  That choice is out of my hands and is in the hands of those that know more than I.  Until then it's just me and shows and books that remind me about why I like to ride in the first damn place.
Posted by The City Mouse in the Country at 9:31 AM

I remember Feasting On Asphalt. Didn't Alton drop his beemer in the sand and break a collar bone?
It is hard to put the bikes away for 5 or so months. I know spring is still a long ways off, but I'm waiting patiently for it.

Yes, he did. To the best of my knowledge he still rides that same Beamer today.

Thanks for the reviews. We own the special edition series of Long Way Round and I too liked it better than Long Way Down. I found Down was a bit more commercialized and with the way people were waiting for them it was more about promotion than riding.

Have you seen Charley Boorman's documentary when he tried the Dakar? I liked it too. It is called Race to Dakar.

Hope you are feeling better and cleared for takeoff soon.

Rob, just think of yourself as an honorary Canadian, minus all the slush, salt and searingly cold temps.