A bit off topic (and late) but HIGHLY IMPORTANT!

A combination of having family visiting from up north, training and working with people for my new position, negations for picking up another route for the small business on the side (we won the bid thank you very much), and weather has kept me off the bike this week. 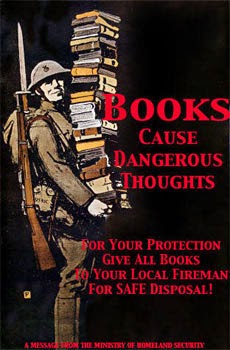 However I could not let Banned Book Week pass without a comment.  Maybe it's because I picked up a dog eared copy of the Motorcycle Diaries recently.  Maybe it's because I know a few writers (See my links page for links to their books).  Maybe it's the firmly held belief that an educated populace can decided what is best for it and that leads to greater freedom.  Maybe its because I used to teach (as well as other things)...who knows.

Banned Book Week is a celebration about the written word and the power that words have to persuaded - Friends, Roman's, Countrymen lend me your ears from Shakespeare's Julius Caesar comes to mind.  In the beginning Caesar is portrayed as a power hungry madman...yet at the end of Mark Anthony's speech in the play; the common people raise up against Caesar's assassins.

Books have the power to make us think.  Provide warnings.  Enter the public consciousness and become part of our shared, common and very human experience.    So, when I hear about censorship or that some people are pushing for a particular belief system over another the hair on the back of my neck raises and I start to snarl.

Sadly the people that raise these complaints are often doing so with the best of intentions.  I'll be the first to admit that I've read some material which I've found questionable.  One book dealt with slavery, racism, used offensive language and was determined to show youth rebelling against authority figures.  The name of that book?  The Adventures of Tom Sawyer.

Yet this book is a classic of American Literature.  Perhaps the racism was part of the time and had to be considered in context (although frankly the racism in the book is shown to be stupid and misplaced).  The issue of slavery, handled well I thought and considering how the book was published in 1876, certainly understandable.  Jim, the escaped slave, is a very honorable man.  Their are lessons to be learned here, if we open our minds to receive them.

Almost two decades ago I read The Autobiography of Malcolm X because I was looking for a way to relate with my students - I was teaching science at a mostly all black high school at the time.  I found it to be an amazing book and marveled at the journey Malcolm X took.  Here was a man that served time in jail, was a pimp and a thief, yet somehow found a way out of a thugs life to lead a people to something greater.  Something better.  Yet, all the students related to was the hatred, not the love that Malcolm eventually came to.

Interestingly enough...both these books have been banned at various times.  I can certainly understand the reasoning...radical and dangerous thinkers who promote ideas that don't suite the mainstream.  I would recommend either of these books in a heartbeat.

I don't know if I'll be on my bike much next week, or the week after (God knows I hope so!).  I hope to be, I miss riding.  But if I'm not, I'll curl up with a classic and catch up with my reading.  We can still think for ourselves, enjoy that freedom.

Rob, we are definitely kindred spirits, and Mark Twain is one of my favorite authors. Look up his letters from Satan. Prepare for a good read. The Stones 'Sympathy for the Devil' title provides a clue.

Oh, and e-mail me your address and I'll add you to the growing ScooterBob list.

Consider it done David. As far as Twain's books, I think your referring to "The Mysterious Stranger."

I don't think any book should be banned. Reading opens the mind and allows us to go on vacation without leaving the house. I love to read.

When we were in high school (in the 80's) in British Columbia some parents were mad when Catcher in the Rye was on our reading list. Luckily we were able to read it anyway.

A bann on certain books will mostly cause even more curiosity. No book should be banned, ever. Funny how some narrow minded people think they can control what people read.