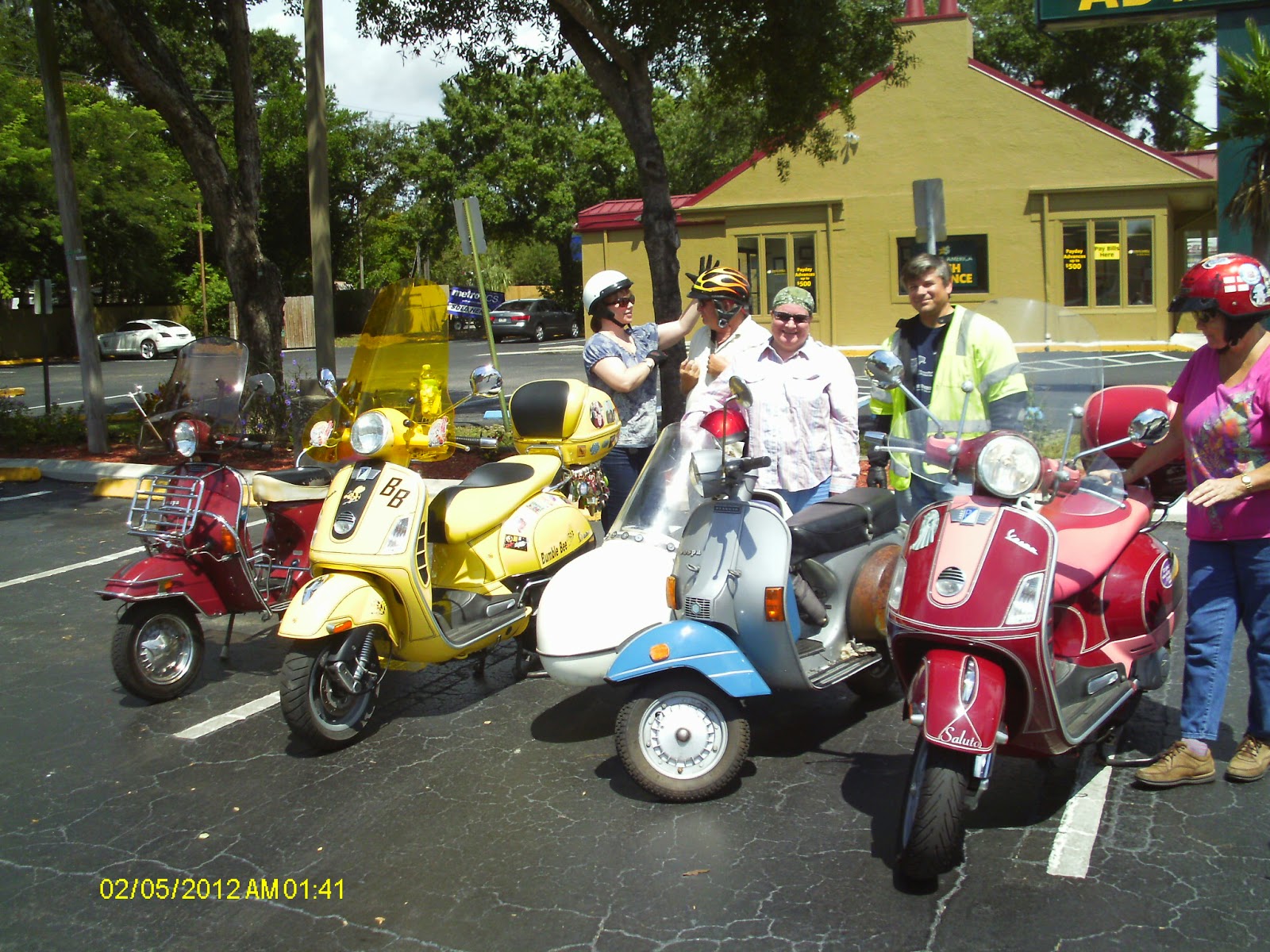 Generally speaking I don't care for group rides.  I like to pull over and do some sightseeing.  I like to stop and read the history placards on the side of the road.  I know that I have to ride at my own pace and my own way, and frankly I don't like having to worry about other riders.

When I was in the Bahama's I had to worry about Sue and her family getting lost (which they did).  When I rode to Sleepy Hollow, one of the group went down on an easy turn.  When I ride by myself, I'm responsible for only one person.  Selfish of me?  Perhaps. 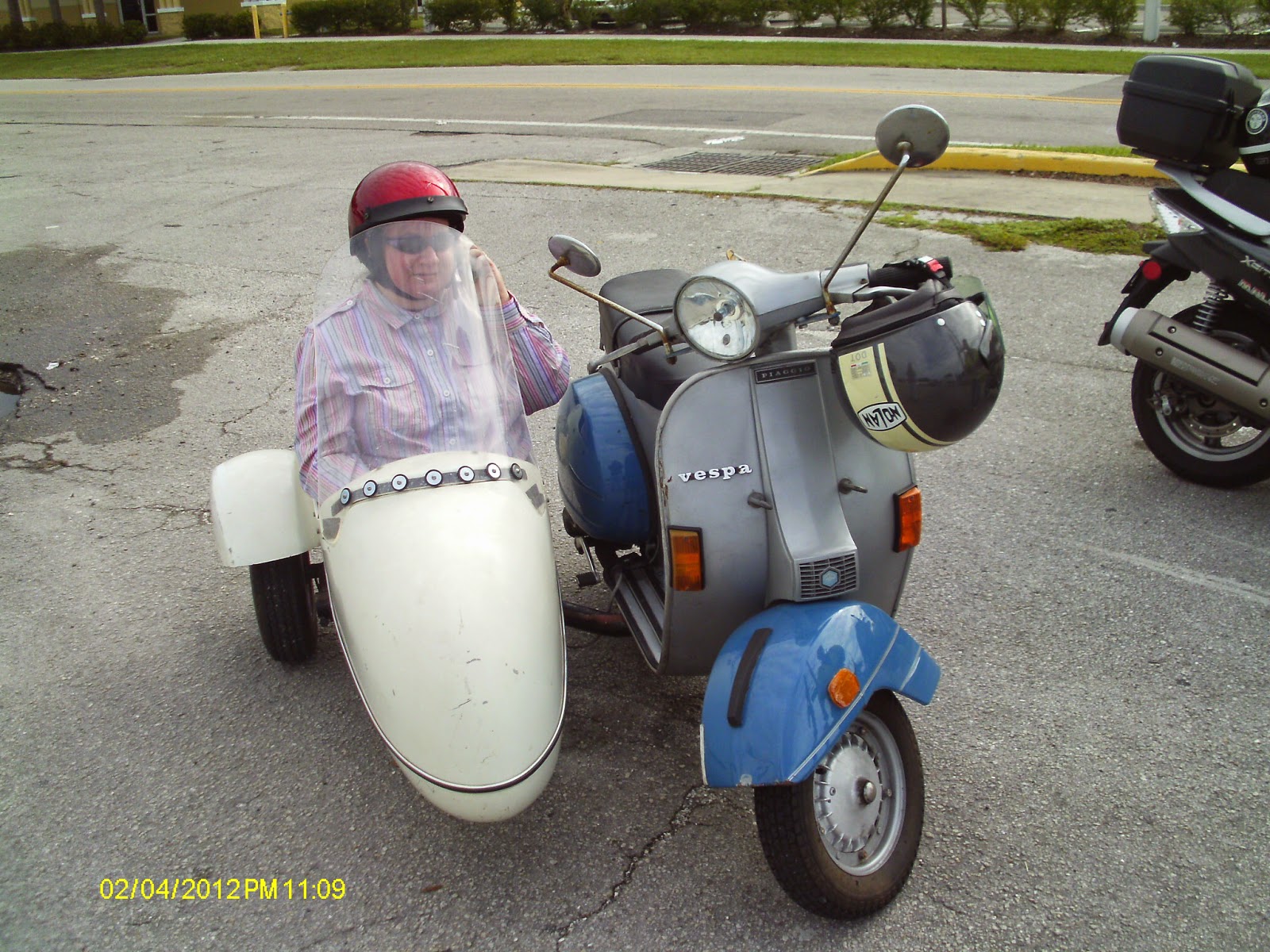 However on Thursday the 4th I came across a post in one of the Facebook groups I follow that stated a group was leaving Lakeland and traveling to nearby Plant City to pick up a few other scooterists (it ended up just being me).  From there they be riding down to Stefano's - a Greek Italian restaurant outside of Tampa for lunch.  How could I turn that down?


So I made the connections, packed up about 5 bottles of cold water and made sure I had air in the tires and a full tank of gas.  The day was going to be a hot one, 88 F (31 C) with a 40% chance of rain, and humid.  I did not want to even think about the humidity, but it's a chance for an adventure and I can't turn that down.  Even though I did think about it.


Off I went to meet the group.  First I met Rob and his wife, who were on a late 1980's model Vespa complete with sidecar.  He did tell me that exact year and model but frankly I don't remember.  I got to admit I enjoyed watching the looks from other bikers as we cruised along at about 45 MPH (72 KMH) through Plant City.   One guy spent some time adjusting his mirrors as they pulled in behind him.  I could see the smile on his face.

I had never eaten at Stefano's but the food was excellent and copious, I will be back.  If for nothing other than the flaming goat cheese and brandy appetizer.

The other scooterists joined us there and we discussed books, scooters, TV and jobs.  I actually met the owner of the infamous Barbie scooter.  It seems at one time he was a deputy sheriff who used to ride his Stella into work all the time.  Someone placed a Barbie on his bike as a joke.  Another day, another Barbie.  After awhile he figured he might as well attach them.  Eventually it became the bike it is today.  Although one story he told me brought a tear to my eye.  It seems that after two years or so of collection his sheriff asked him to ride a ten year old girl that was suffering from a brain tumor to a bikers rally in her honor.  I'm sure her smile was ear to ear.

He gives out Barbies to little girls that approach him and his bike went through the drive through at a Las Vegas drive-thur chapel when he renewed his vows to his wife as a complete surprise..  I liked him immediately.

No, he didn't ride the Barbie scooter today but a yellow GTI decorated in its own right.


After lunch one of the ladies lead us through a slow ride through the surrounding neighborhoods.  It was nice to wonder through one of the more nicer parts of Tampa at a lower speed.  I got to see people smiling and waving.  Taking a moment to watch the scooters pass and hear the barking of little dogs trying to scare big machines away.

I'm not a speed demon by any means, but serving as tailgunner on the ride through the neighborhood I found myself enjoying the slower pace set by the smaller scooters.  Even though it was the hottest part of the day, I was cool.  Moving just fast enough to keep the air moving but slow enough to keep it cool.

I hope to ride with this group again.   They even invited Sue along.  So you know, I just might learn to like group riding.  I've not enjoyed the company of strangers like this for some time.  Total ride = just shy of 78 miles (125.5 KM).

And here they are:

Posted by The City Mouse in the Country at 3:10 PM

It's nice when you find a zen with a group of riders. I am pretty fortunate because the group of women I ride with are pretty chill and enjoy leisurely rides. It's not about fast for me, particularly with groups, too many dynamics to worry about. Barbie scoot is coolio!

So glad you had a good group riding experience.

I think most of enjoying group riding hinges on the group. There can be good group rides and bad. It sounds as though you found a good group. Thumbs up.

I'm with you on the solo rides, sometimes an experience like this one, however, can be just as fun. Sounds like it was.

Hi Robert! I'm so glad you enjoyed our little group. We enjoyed meeting you, too. That restaurant is definitely going on my faves list. YUM! They neighborhood was beautiful, too. It was a good day for us all. I hope you can get Sue to join us next time. There are several women in our group and several sidecars. She could tryout riding in them & might really enjoy herself. I know I love it!
JaneyG

I've tossed and turned a little on group rides myself. I've only ever went on one and it was OK. The group of scooterists were very welcoming but I sometimes have issues cohorting with a group that has a long standing history. They are also 45 miles away and just to get to them on my 150cc, ride and then back home pretty much commits most of the day. I've given some though on starting a group right here in my town ~130,000 population but in the midwest the scooters are few and far between. Maybe if I could find just a couple people to ride with that would be OK and without all of the trouble of running and organizing things. For now though I still really enjoy just riding the 14 mile trip to work and back taking country roads and going at my own pace.