Me, the South and that damned Stars and Bars

I try to keep my personal politics out of this blog.  I'm a liberal and a dyed in the wool Democrat although I joined the Green Party back in 1996 because I didn't like my parties candidate.  I found the Greens to be a little in line with where I was politically.

Personally I have no "dog in the fight" in the debate regarding the Confederate flag.  I grew up in the north and the "Rebel" flag was something that that hung in dorm rooms or was associated more with fans of Lynyrd Skynyrd than anything racial.  Sure it was used by the KKK and other hate groups, I knew that...but my friends and I all went to colleges were we were exposed to different cultures and ideas and then went to work in diverse work places.  We all knew Jews, Blacks, Homosexuals and other minorities.  We may have had different thoughts on where this country went right or wrong (and still do) but the debates were mostly friendly.  The flag simply was not part of our heritage for good or ill.

Florida quietly removed the Confederate flag from it's government buildings, parks and memorials long before I moved here.  You still see it flying on private property but generally speaking, with one notable exception, it's not very prominent.  At least here in the Tampa/St Petersburg/Orlando area.

So why write about it now?  Because frankly I have mixed feelings about it and putting things down on paper is one of the ways I work out my feelings.

I've been doing a lot of reading about the flag, being the news junkie that I am.  Case in point, I did not know that most state flags did not include any Confederate symbolism until the late 1950's or early 1960's and that was done mostly as a reaction to the growing Civil Rights movement and the perceived interference in "States Rights" by the Federal government  Many states in fact tried to enacting laws to sidestep the Federal courts when it came to Civil Rights.  Many of these same states are trying to enact laws to sidestep the recent court decisions on Gay Marriage.   It's a fight they are going to lose but the same tired arguments are being raised again.

I've also been planning a ride to historic Brooksville - which was named after infamous Preston Brooks - a man who won fame for attacking fellow Congressman Charles Sumner with a cane; who at the time was making an anti-slavery speech.   The beating of Sumner may have lead indirectly to the Civil War.  Interestingly enough, it's not mentioned on the town's website.

The more I read about Brooksville and its violent past, the more it sickened and intrigued me.  More on that in upcoming episodes of this blog I promise.  If the weather ever cooperates with me (I was rained on consistency for two days straight).

I guess I just don't truly understand how a man with a different skin color should be treated as a second class citizen.  Not I'm not a saint.  There are neighborhoods where the windows are up and the car doors locked because of a perceived or very real threat.  I've quickened my pace at times.  Generally speaking though, I try to follow the Golden rule.  I've also witnessed the so called "Driving while Black" phenomenon first hand...and had the white officer look me square in the eye ignoring my black friend behind the wheel and ask me with a straight face if I needed help.  I like to think this would not happen in my hometown my Pittsburgh, but I know it would. 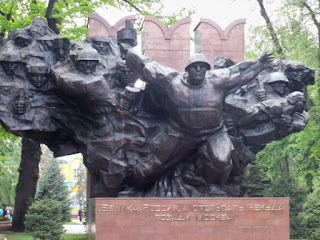 To a certain extent I understand why many see the flag as a racist symbol.   Years ago I was in a country called Kazakhstan, which was part of the old Soviet Union.   What struck me as odd was in the center of a square there was a huge statue dedicated to the thousands of Kazak soldiers that lost there lives fighting for the Soviets during World War Two.  The stone faces were European.   Kazakhstan is mostly a mixture of Asian and Middle Eastern faces.

It was explained to me that many Kazaks died during that war, but they never received recognition...it was always the Russians.  A case of the powerful keeping the weak down.  The Confederate flag is no different.  It's just another symbol.  A symbol that for some does the same thing.

Truly I understand why some see it as "Heritage".  Our history is full of people that kept Native American traditions alive despite attempts to "civilize" them.  World history is full of similar examples...and where one tradition could not be replaced, it was assimilated.  To many, the flag is a symbol of their ancestors who fought and died for seemingly lofty goals and for that reason alone it's worth saving and celebrating.    For many it's a sign of rebellion, of the little guy standing up to the big guy.  On that I agree.

Was the Civil War about state rights?  Yes.  However to deny that part of the state rights movement at the time was the right to enslave another is rewriting history.  Living in 2015 I can not think like a soldier in the early 1860's, willing to die for either side and I know there were many who fought for the Confederacy who did not own slaves, or disagreed with slavery.  Still they fought for a ideal and in my personal family history, we have soldiers on both sides.

I've lived in the South in one form or another for nearly 20 years.  It's changing.  It's slow but it's coming.  Removing the flag is just part of that change. Sure it's part of the Southern culture and heritage just as much as sweet tea and grits but in the end it's got to come down.  The south is going to have to grow up and move out of the past, and part of that growing is accepting that the argument(s) to keep the flag just does not hold water.
Posted by The City Mouse in the Country at 11:00 PM