Getting small - I visit a Tiny House 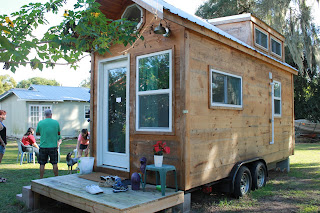 I've had most of this week off from work, and lately the weather has been perfect for me to get out and do some exploring.  I like the odd, I like the unusual and earlier in the week I heard about a tiny house "open house" event.  Jessica is the owner of the cute 8 by 18 foot home (325 square feet of living space). I've seen some of the programs on TV but have never seen a "tiny home" up close and personal.  So you know damn well I was going to the open house.   You can view her Facebook page here.

I'll admit there is a bit of me that likes the idea.  Paring down to almost nothing, taking things to a simpler level (I have seven different pairs of dress shoes alone) and frankly finding a way to live with less.  As one of the woman I was talking to at the open house stated; "One of the things you need to do is determine what you can't live without, and build up from that."

One guy had a 55 inch HD TV in his slightly larger home.  I could live without the TV.  I would need my PC.  I suppose that would free up some wall space.  The home actually does look spacious and once you're inside three or four people could sit comfortably.   A light paint color and lots of windows helped with the illusion of space.

The kitchen sink doubled as the bathroom sink and the shower was tight, but something my 6 foot 220 pound frame could fit into.  Although the toilet looked....complex.  I really wanted to ask about that but didn't, maybe next time.

The home was fully equipped with at small but functional kitchen and a semi-full sized fridge.  "I can't give up my ice cream." Jessica told me.

Sadly I was not able to stay longer than a hour or so, and I did have questions about life in a tiny home.  While it's probably not for me, I can still admire anyone that lives life on their own terms.  I was speaking to a guy named Will about how I lived in a 500 square foot apartment years ago and felt the walls were closing in on me.  We laughed about how the walls sometimes closed in on him in 600 square feet (his "large" home).

There were people there that already owned a tiny home, others that were curious, family and friends.  I felt welcomed there.  I'm sure that if I would have stayed I would have asked more questions, found out some information that haunted me - "How much does this home weigh?" for example.  Or, "Why does the door swing in instead of out?  Would that not give you more space?"

No matter.  It was a good day out and about.  That's all that matters.


Posted by The City Mouse in the Country at 6:22 PM

Rob, I look forward to paring down to less stuff. I don't think a tiny house will be the result, but smaller for sure.

The Tiny House movement has also become popular in this part of the world. I very much like the idea of reducing to the max (although from my experience, moving around a lot will do that to you naturally...).

That would be a fun day out.

We enjoy watching Tiny House Nation and Tiny House Hunting on the FYI channel. We look forward to the day where we can live in a tiny house. The 912 sq ft we currently live in is entirely too large.

I live in 1555 and still need more space LOL

Oh dear, there's two of us rattling around in 2,700, not counting the basement or the garage.

Sounds like an awesome ride -- and well-written post too. Unfortunately, my Chihuahuas, scooters, and I need more space :)

I lived on a 20 foot boat for a decade. It was the life of a single man so I moved into my girlfriends' homes as they came and went. I would need two tiny houses, one to live and one for storage. Three maybe, one to garage the motorcycles. Living in a small space gets claustrophobic when you can't put the accumulated shit away.