The arrogance of some dealers (and some local vandalism)

Before I begin this week's little rant I want to state one thing.  I'm not selling Kimmie.  I'm perfectly happy with my little scoot.

It's been a hard, long and tough week as we had had to deal with some ongoing personal issues.  So with some time to kill and absolutely nothing to do I decided to wander into two different dealerships to check out some models. 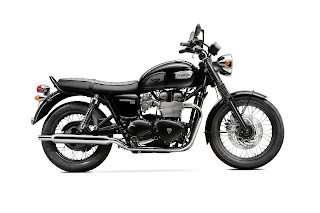 The first was the local Triumph dealership.  I like Triumph, to me when you think of what a motorcycle should look like, your looking at a Triumph.  It's all sleek lines and controlled power.  The Bonnie's are considered classics for a reason.

I've already decided that when the time comes to have a new bike I'll most likely buy the Honda 700 CTX but here I am at a Triumph dealer.  I throw my leg over the Bonnie, and....wait.   I don't wait long as a rather brusque older gentleman rushes over and starts to sell me.   Maybe he was an old salesman.  I've done sales too at various times in my life.   Sometimes you know when your dealing with just a "lookie lou."  Anyhow long story short I was dealing with him for less than 10 minutes when he's already shuffling me out the door.

A new friend of mine is pushing me to buy a Harley but I've no desire for that.  She's dangerous in a lot of ways since she rides without gear and I am Mr. ATGATT.  But lets put that aside for a moment.

Compare that experience to the one I had with my local dealership, Barney's.  I walk in and start chatting, I throw my leg over a nice Honda.  Again over a nice Aprilia.  We chat about local rides, about Maine.  30 minutes pass...then 50, and I realize that they have not tried to sell me yet.  We are bike people talking about bikes.

Guess where I'm going when the time comes.

Sadly where I live suffered a rash of vandalism.  I live in a quiet and safe community (okay, older community) and bikes are pretty common.  Mostly Harley's which are used maybe 3 or 4 times a year to go to special events or rallies.  You may hear the occasional low rumble of a bike being worked on but by no means is my neighborhood Hell's Angels central.  It's more Geriatric Angels central. 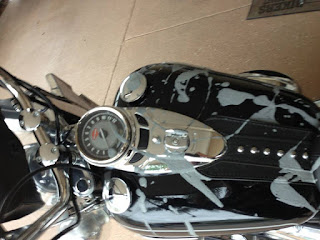 Which makes the recent vandalism all that more disturbing to me.  Someone poured paint over one of my neighbor's Harley's.

There is, of course, no excuse for this.  From what I understand they have an idea of who the culprit was and are taking the appropriate legal measures.

From what I understand the paint was water based so it actually did come off the bikes with proper cleaning.   Still though you hate to see anyone damage someone else's property.  The good news is that this damage was not permanent or hard to fix.

As I look at the photo though I can't help but wonder if any paint was poured into the gas tank itself.  That would be an issue. 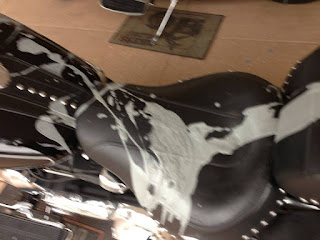 Posted by The City Mouse in the Country at 6:37 AM

Robert, I am with you on the Bonnie and its retro look, however I'd like it with modern technology, and I am still waiting for them to announce an ABS version, until then... I stick to my good ole Sporty, which is plenty reliable and also a very much retro looking bike.
I had a similar sales experience today in a bicycle shop with a guy who was completely overselling after I already my decision, and was ready to pay... oh well.

Vandalism is terrible, and unfortunately it doesn't always come with the young and restless, but it could well be a disgruntled old neighbour of yours. It sucks when it happens. I hope they get the culprit, and tear and feather him.

Robert - I wouldn't stray from my local Honda dealership. Even when I had a Bergman, they never tried to sell me - in fact most often offered compliments on the Bergie! When I DID trade it, that's where I went and in about a very pleasant hour, I had a pre-owned Shadow 750. Great people and they know I'll go there for everything.

Yikes. Why can't people just leave other people's things alone. I am glad the pain was water based.

And as for dealerships...... There always seems to be quite a difference in them. Some area welcoming and will talk for hours even when you have no intention of buying and others are just an awkward experience. I really hate the ones that follow you around and feel the need to babysit sit you as you wander.

I rode Conchscooter's Bonneville earlier this year and it felt nimble and confortable.

I may be remembering this wrong, but definitely compare the seating and footpeg positions if and when it comes down to those two bikes.

Sorry to hear about your neighbors bike. Vandalism unfortunately is a crime that will never go away in this country.

My mind boggles at the vandalism thing. On the bike question I think you should go where you feel comfortable. The dealership is a big deal when buying a bike, but I wouldn't let one salesman with a bladder problem ( to be charitable) put you off. I check the mechanic's lair and I ask questions. Naturally i prefer the Bonnie to the CTX but I am a fan of old fashioned looks and my feet under me. Either bike will serve you well.

I am renting an Indian Chief on Monday in Orlando and am casting about for a lunch destination. Make me an offer and I might head west... or just delete the comment and say nothing! (ooh, that was low).