I knew in the back of my mind it was going to happen sometime.

I was on my way to work the other day, and I heard something that perked up my ears.  I was not sure what it was but it just sounded wrong.   A pop, a snap...honestly I could not tell you.   Just that sound that brings an "Oh Oh" to your mind.

Twisting the throttle a bit resulted in a roar of the engine by no RPM's.  I put on my turn single and coasted safely to the side of the road.  I still had power, but I was not transferring that power to the rear drive wheel. 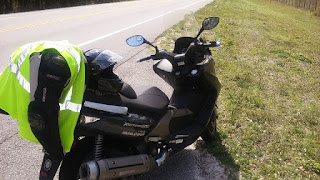 Pretty simple to figure out what happened.  I had, in my limited knowledge of Kimmie's internal workings, most likely lost my CVT belt.  After some 27 thousand miles (assuming it was the original belt) I could not bitch.

I don't know how long I will be on Kimmie but I do know this.  The chances of me replacing that belt again were slim.

Luckily I have towing via my insurance company Safeco.  I call and they dispatch someone out to me.   I was dealing with a Customer Service Representative that was new to her job.   I could hear it in her voice and the way she was having issues pinpointing my location (I've worked with GPS and call centers for years so I walked her through the process).  After about a ten minute call I was told a truck would come and get me in an hour.

I called work, I called Sue and I tried to find myself a shady spot to sit and relax in.   About 10 minutes later I get a confirmation text.   I play around on Facebook while I wait.

An hour goes by....again an automated text stating the truck should be arriving.   Then thirty more minutes pass by.   I call in to Safeco and ask about.   Seems that I'm outside the coverage area for the original tow company.   OK....why didn't you get another tow company?

I was assured that I would have a truck come and get me and not five minutes after hanging up with her....I get a text.   It's for the original tow company again.    I call them directly....and I find out that I'm still out of the towing area.

Another call, another representative.   A new record in created.  A new towing company is assigned and this one is out of Tampa...and it will take them 90 minutes for me to be serviced.

I sigh, call off of work because by the time I get towed and get the bike resolved.   By the time I get home and drive into work my 8 hour work day will be down to 3 hours.   It's not worth it for me to go in.

Sue finished up what she needed to do and pulled up beside me so I would not have to deal with the sun and wind.  We call Triple A but find out that we don't have motorcycle towing as part of our package.

As we sat in her car and discussed what we were going to do....LO AND BEHOLD....a tow truck and it was from the original company that was dispatched.   It seems that they were assigned to come and get me after Safeco agreed to pay them some more money.  How nice of the them!  How nice of them not to inform me! 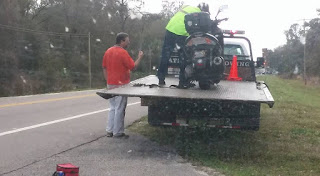 Anyhow, the grand total wait time worked out to be like three and one half hours before everything finally got resolved with Kimmie.   Then I got a phone call from the company dispatched from Tampa....seems that no one informed them that the original company was doing the work.

Kimmie should be back on the road shortly but it does through the proverbial monkey wrench in my plans for the coming weekend.

Posted by The City Mouse in the Country at 7:57 AM

Hope you aren't without 2 wheels for too long.

We've been with AMA for about 7 years now. While I don't agree with all of their policies, their tow coverage/roadside assistance can't be beat for under $50 a year and it covers all of your vehicles. We've used them once to tow hubby's Tiger and once to tow our Nissan Versa when it left me stranded in the freezing cold.

Rob I change the belt about every 10k kms max on my Vespa. Rollers
Last much longer. I'll be doing my first roller change in a few weeks.

That sounds like a sucky day. I would definitely be pissed off at the insurance company. You spend all this money to these corporate companies, but when it comes for them to do their part, they either take forever doing it or fight with you over a dime. Sometimes, I feel it is not worth the stress.