close calls and blue balls (with a secret at the end)

I was going to enter the left lane, moving over to avoid a guy that kept stalling his souped up four cylinder stick shift car.  A quick glance in the mirror showed a black car exiting my lane and coming up fast, I stayed where I was and let him pass me then eased in behind him.

That's when the spider sense tingled.

He was moving to fast, pulling up quickly behind a slower moving car.  His brake lights glowed a angry red...I cursed and hit the brakes, the front wheel locked and the back end rose up ever so slightly...I let go of the front brake out of reflex smelling the burnt rubber of a burning brake.

The bike still moved forward and I pressed down on the front brake again as I came to an emergency stop.

I didn't panic.  I didn't curse...I didn't even think it was that scary at the time.   The event was so quick, so quick that I didn't think...I simply acted.

I didn't even think about it till afterword.   Replaying the event in my mind,  I had to smile, I was safe and the bike did not go down.  There was no accident.   Then I kicked myself for putting myself into what was a stupid situation to begin with.    I should have had a better situational awareness of the traffic around me.  I should have realized that if I was frustrated their were bound to be others being pissy as well.

The traffic was stop and go the whole day...what made me think the other lane would be open?   Why was I in such a hurry?

Instead I was to worried about getting around a single car that was holding me back.

"Cocky," I used to say, "would get me killed."   Somehow I had violated the unwritten first rule of my motorcycle riding.  It's time I started to repeat that mantra.

I hate to use a off color phrase for male sexual frustration, but honestly I like the way it sounded with "close calls".

In Florida this time of year we have pop up showers that can hit us any time of the day.  I rode into work the last two days.  Each time worried about the weather and each day the sky opened up so badly that that certain streets in the Tampa area flooded.

I left work shortly after 8 PM both nights, I turn north, looking at darkening skies and feeling a bit worried about what I would be driving into.   I was not gone 5 minutes before I drove into the rain, it was a strong storm, and I started to count the time between lightening flashes...One Mississippi...two Mississ....crap.

That storm was moving quicker than I was and I started to seriously consider pulling over to put on my rain gear, or maybe just wait out the storm.   Then the skies opened up and I went from having a few drops on my helmet to soaked in a matter of moments.

"No use putting on the rain gear now." I thought.  I drove gingerly though the storm for another 5 or 10 minutes....then that was it.  I was out.

That's the frustration.   Do I pull over, dress in my rain gear and hope that I will continue to be rained on?  Or do I ride, wet, all the way home?

How many times have I driven in my frog toggs sweating my ass off?

Summer in Florida is full of those pop up showers...riding in the rain is just part of the experience, although it can be a little frustrating at times. 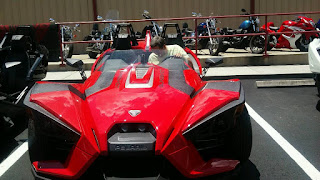 Posted by The City Mouse in the Country at 2:39 PM

Funny how many people refer to the Slingshots as Batmobiles.

We have one that parks in front of my office every week or so and we can hear people refer to it as the Batmobile all the time. I wonder if the riders/drivers think they have become Batman too.

They are pretty cool looking, lower to the ground than a bike though, so I'd be worried about visibility when in traffic.

You getting s Slingshot? Glad your emergency stop ended well.

No. We happened to be passing a local dealer that started carrying them. However for a test drive I was required to be in full safety gear, which I was not.

They are the size of a small Honda, and I'm out of parking space as it is.

My rule with showers is I get my frogg toggs on promptly on my way to work and on my way home maybe not so much. I have broken both rules and arriving at work soaked sucks.