The rain in zephyrhills falls mostly on the biker

It was a simple plan.

I have ridden with the Scooter Crew before, and this time they wanted to come out and explore Zephyrhills and nearby Dade City.   Generally they try to ride in the Lakeland and Orlando area where most of them live.

My part of the world is about an hour away...so I felt honored.  The only problem is that I was not really as prepared as I would have liked to have been to lead a ride (by default, I know the area).  Originally it was going to be a group of nine people (ten with me) but a few got ill, and the weather was refusing to cooperate with us.

The weather was hot, humid and threatening rain all day...but four people showed up at a local hole in the wall called Barb's for breakfast.  Barb's is actually one of my favorite places to eat because you get good food at a good price.  Plus it's locally owned.

Because of the weather I really didn't take them anywhere or show them much.  We cut through town and then I headed up to Dade City.  We were only out for about 35 minutes when the group decided to split off and head home.  I skipped things like the airport, the train depot and where they bottle Zephyrhills water.

Frankly I don't blame them as the sky's were darkening in parts and we had been running in and out of sprinkles all day.  I would not want to ride an hour or two in the rain if I could help it. 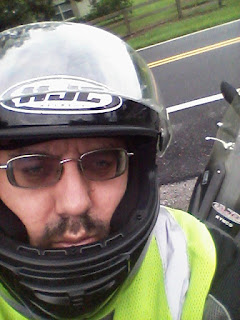 The only problem is that I wasn't ready to quit riding.

I started to meander towards home, only to fill up my tank and decide to head out for a bit.  I was still a little snake bit so decided to stay as near to home as possible.

The funny thing is that the promised rain never hit.  Well me at least, I don't know what it did as they headed home.

It occurs to me I have not ridden my little special road in a bit, and that I would have shared it with them in a heartbeat.  Again I'm the only bike on this loop and I enjoy it's twisted gnarled route with a smile on my face.

It also occurs to me that I need to explore Dade City more, it's only 12 miles from me, but I rarely spend any time there or know much about it.   I know there is a muffler man there and one place that makes all their food fresh and daily.  It's another one of those wonderful locally owned hole in the wall places that I love so much.  That however is for another time.

Turning down a side road I don't think I've been down before I come across a male peacock standing in the middle of it, his feathers fully open.  He ignores me as I pull off to the side and struggle to get my phone out of my pocket.

By the time I get my gloves off and my phone out, he has wandered off into a nearby yard.  I do snap a few of them and wonder why my pics are blurry.  Hopefully you'll be able to make him out in the picture below and despite my best attempts to get him to open his plumage again he refused.   I guess I just wasn't his type. 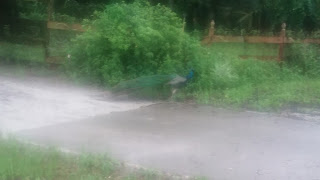 This road surprised me in another way.   Not only did it offer some twists but it was also the site of the oldest cemetery in Pasco County.   I have a love of history and would have explored this place a bit more in depth however I was not sure if this was private or public land.   As such, I would leave that another day but an interesting video is here showing some of the sites if you will.  According to the historical marker the graves date back to at least 1855.  I found it interesting that it may contain the remains of both free and slave.

Later still a family of cranes come out of the brush to greet me.

All in all I think I was only out for about 2 hours and put in roughly 66 miles.

But I had fun, and that is all that matters.

Posted by The City Mouse in the Country at 2:15 PM

Great ride leader. I to would have liked to see done of the signs and do my toe on the spring water source. Ha. Thanks and good to meet you amd your wife. Look forward to another trip to your neighborhood in the future.

Always good when you can skirt the weather and get a decent ride in on a favorite road. Hooefully you guys will all connect again & they can ride in your area again.

Sometimes you just get lucky, and it doesn't rain on you. Putting on rain gear upfront will sometimes to the trick... we did that yesterday and it never rained...

It is good when you are out and the weather cooperates and you decide to keep riding. I like the peacock pic even if blurry.