Two posts in one weekend! SAY WHAT???

The weather over the past week has been rainy and generally hot and humid.  The weatherman was calling for an 80% chance of rain, but the catch was it would hit after 2 PM. 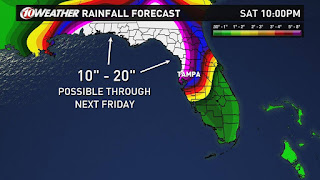 Since it had been a while since I was on my beloved Kimmie I decided to take advantage of the cooler temps and get in a ride before the rain hit.   I also wanted to go further than I have been.  Lately it seems all my rides are either commutes or shorter jaunts of under 50 miles.

I wanted to stretch her legs a bit with a longer ride.  The last time I took her out we traveled roads I knew and didn't know, we did various twists and turns and had some fun.  I was just not happy with the mileage, doing just under 50 miles.

On Saturday I left about 11 AM with every intention of putting on 100 miles minimum.  I knew the rain was coming but I had three hours to conquer my goal.  I could do this.

So I started with no destination in mind, but a general plan to head south towards Tampa, catching some of the more interesting and twisty roads that I knew of on the way. I sort of had a big circle in mind and stick mostly to the back roads.  I also decided to go down some side roads that I've passed 1001 and one times only to find they either dead ended or took me to a familiar road.  Plus, I always head north and west for some reason...I really have not explored the east and south of Tampa that much.

However I started to realize that their was a flaw in my plan as my stomach started to growl.  I had eaten a bagel with some hummus about 7 AM and nothing since then.  It was also national mead day.  What many people may or may not know about me is that I enjoy a good craft beer now and again, or a bottle of wine.  Mead is basically fermented honey but it's also much more than that.

The more I thought about this the more my stomach growled and one of my favorite watering holes I knew would be jumping with my fellow cider and mead heads.  Generally speaking they don't serve food but I knew of a pizza place next door.  Should I stop?

Of course I should!  Although alcohol and bikes don't mix, I did have two droughts of the nectar of the Gods.

About 90 minutes later I was back on my bike and looking at the sky with a bit of worry, I was still under the 50 mile halfway mark but the sky's were beginning to darken.  I could feel the temperatures drop some and I cursed at my choice to spend some time in one of my favorite places, but I didn't curse at myself to much.

I went towards downtown Tampa some then turned Kimmie northward towards home.  Twisting the throttle a little bit as the rain started to fall so I could get ahead of it some, and generally that's what happened all the way home.  I got wet, but not as bad as it could have been.

I pulled into my spot about twenty minutes before the skies opened up, checking my mileage I put on 73. 4 miles.  Not bad, but significantly under my goal for the day.   Still though, I had good riding weather.  Good food (2 slices of pizza and a coke for $6).  Some good mead and company which warmed my heart.  I'll chalk it up to a good weekend.

Posted by The City Mouse in the Country at 9:27 PM