A wasted day in the Channelside district

This time of year in Florida, your going to get wet.  The only thing that matters is how wet you wish to be.  I have no desire to ride in lightening storms.  I've done it before but it really doesn't make sense.  So when there was a break in the weather on Saturday morning I decided that the best thing I could do was ride into Tampa itself.  I rode with no destination in mind, preferring to just go where ever my tires took me.

However as I rode a small germ of an idea started to take form in my mind.  Tampa sits right on the Gulf of Mexico and that allows the big cruise ships to port in Tampa, I've actually taken a cruise or two out of Tampa.   The only problem is that the gulf itself is very shallow.  At times reaching a depth of 30 feet, so the size of the ships are limited.  If you have never taken a cruise, you don't know how big those ships actually are.

My plan was simple, ride south hitting some of the twisty's I know in the are and head towards the port of Tampa.  Then perhaps head into the city some and get photo's of Kimmie in front of some of the sights such as the "exploding chicken", the world's largest bowling pin and Florida Aquarium.  This area is often referred to as the Channelside area, and although a bit pricey, it's one of the nicer parts of town.  It's a combination of high end shops, restaurants and residences. 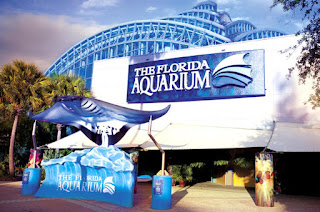 To paraphrase Robert Burns (Steinbeck stole the line from him) "The best laid plans of mice of men often go awry."  While I was able to see the chicken and the Aquarium there was really no good area for me to pull over and take pics...the chicken itself sits in the middle of a round-a-bout making stopping impossible.   The bowling pin was out of the question due to construction in the area.  The pictures above are all stock.

There were no cruise ships in port and the parking lots were closed off, most likely to protect the cars parked there.  Which makes perfect sense to me. 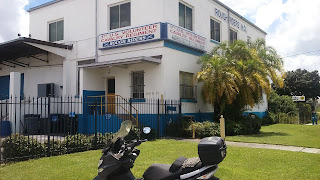 I did however find the modern day headquarters for the Rough Riders, so I had that going for me.  This is one of the many volunteer organizations that does various good deeds throughout the year.  At the end of the year they participate in the annual Gasparilla Pirate Festival.   Legend has it that when the pirates invaded the city, under the command of Jose Gaspar.   Tampa's Jose Gaspar, not being a direct influence on the Jack Sparrow character, claim to fame is that the story of Jack Sparrow using his back hair to surf on the backs of sea turtles to escape a desert island, is taken directly from the Gaspar legends!  Anyway...a fleet of ships went out to battle Gaspar and seeing the foolishness of the task, turned back and joined the city in the raid.

Why or how the Rough Riders are associated with these brigands I've no idea.

Generally though it was a fun day out and about, and any day out on the bike is a good day.  Sadly however those days appear numbered.  Their is a chance, although a small one, that the topical depression currently in the Gulf will become a small Hurricane.  The first one to hit Tampa since 1946.

At this time it's still a weakly organized tropical depression and not expected to do much other than give us a serious soaking and associated flooding.  It looks like that I'll be putting Kimmie under her blanket and tucking her into a safe corner over the next few days. 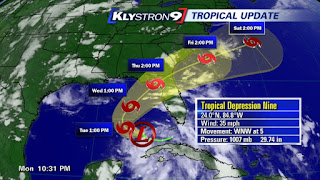 Posted by The City Mouse in the Country at 10:49 PM

We have been getting a lot of heat here, not the heat you get, but high 80's low 90's, its coolled off now and we have a forecast for rain, which is good because its really dry here. I must confess I am pretty much done with riding in the rain, so the Duchess will be staying in the garage.

Glad you got out before the bad wether sets in.

It is always a bummer when you go to get a picture with a roadside attraction but there is no safe way to get up close with the bike.