Self-Sufficiency and other things 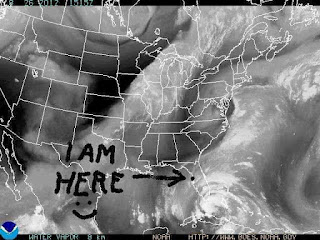 Even though Hurricane Issac never really threatened the west coast of Florida, it did effectively kill safe riding for a few days.  That being said it did affect our fellow riders in and around New Orleans.  If you wish to donate time or money to the relief effort I highly recommend Florida's Foundation and of course the American Red Cross.

As it so happened I had a few days off and I decided to use my time effectively and catch up on my reading,  my TV watching (I watch maybe 3 shows religiously and other wise would have the TV off) and a few other odds and ends that needed done.   I even managed to do some weeding in the garden, and get bit by a few fire ants in the process.    We even found time to take in a movie at the local cineplex and wash the bike.

In other words the hurricane did something for me that I was not expecting.  It slowed time down and gave me time to do things.

I've also been reminiscing a bit lately due to one of the books I've been reading; Eric Brende's Better Off - Flipping the switch on Technology.  I am all about trying to make my life simpler and ever since watching a 70's British sitcom titled Good Neighbors on my local PBS station, a wonderful little sitcom about a family that decides to go off the grid...in the middle of London.  Imagine raising pigs, chickens and goats in the middle of a city block!   I have been in love with the ideas of self sufficiency and later permaculture. 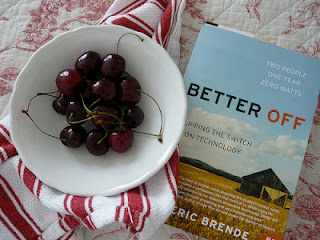 That in turn, lead me to my explorations in gardening, canning, cooking, Taoism and reducing my carbon footprint and environmentalism.  At various times in my life I've either been without a car or lived with just one car, preferring to take the bus or bike somewhere.  I've lived in areas where this was not really a problem for most of my life.  If there has been a problem with me accepting more of this type of life is that I'm lazy.  Weeding the garden takes time, canning can be a pain in the ass.  I've not always lived in areas that were conducive to that lifestyle either.  Plus I'm more a theory guy than a actual practitioner.  It's easier for me to run to the store and buy that bland tomato even though I've eaten the ones I've grown.  There is no argument about which tastes better.

If your not familiar with Brende's book, it basically deals with his 18 months living in a "minimalist" community, where all but the most basics of technology is shunned.   So he learns about craftsmanship, community and how time actually opens up when you take a slower route.  Time to spend with friends, family and learning new skills, all without the benefit of most modern technology.  In a way this applies to bikers, as I have made new friends and learned new skills...simply because I took a different route.

It's an interesting book, and full of  interesting idea about the roles technology plays in our lives.  In becoming a one car family, we have reduced our carbon footprint; and in theory saved money as well on things like gas, insurance and other "incidentals."  At the same time I find myself looking into the idea of getting a Smart Phone with GPS and other functions.  Something I really don't need but I could see using in the future.  That's the problem with technology...you always want more of it.  Which in turn complicate's your life...and my cell phone bill.  Which is the theme of Brende's book.

Looking for a new phone, learning how to replace the belt on my CVT, installing a rain barrel to catch rain run off to reduce my water consumption and water my organic garden.   Simple machines that become complex.  Simple easy ideas that people have forgotten.     What role does technology play in my life?  Why would I gladly give up TV but not the computer for example?

I guess I just have to find my balance.
Posted by The City Mouse in the Country at 12:29 PM

If you haven't done so, listen to George Carlin's rant on "stuff". Honestly that altered my thinking. We have way too much stuff. Our possessions own us more than we own them.

We're hoping to move to another city. I'd love to be able to do that and take that as an opportunity to ditch a lot of stuff. I fantasize about some buyer insisting on buying our house and all its contents. I'd like to start fresh. I'd have a stark modern house with lots of windows, minimal furniture. I think that some technology is helpful in simplifying things. I think that an iPhone, iMac and a flat screen TV can be all the technology you need, and supply all your music, art and memories in one relatively small package.

I have a theory that you could more easily get rid of stuff you're hanging onto for sentimental reasons by taking pictures of it, keeping the pictures on the iMac, and chucking the actual thing (or selling it, or whatever).

I haven't actuallly done any of this. But I feel a deepening need to move this way. It has nothing to do with saving money really, and more to do with getting rid of baggage and responsibility.

Thanks for this post. Keep writing and I'll keep reading.