It was one of those days where I should have paid closer attention to the weather.

The weather here in Florida seems to follow a pattern.  I enjoy my day, soaking up the sunshine and doing some odd errands and odd jobs.   It's when I get ready to go to work...and the skies do open up and it doth rain upon me!

I drove in sans rain gear about two or three days ago since the sky's were light.  However the closer to work I got the darker and darker it got.  I realized that it was going to miss me, so I kept going...pulling into work and hiding the bike under the loading eves about 10 minutes before the rain hit.  "I was lucky" I thought.

Two things happened during the day that bothered me however.   The first was that someone moved the Burgie out of the dry area and into an area of standing water.  I know they did this for a UPS truck but no one bothered to get me?  Or even look for the owner?   Would this have happened to a Harley rider?  I think not!  Hell I would not of minded so much if they would have moved it back to it's original spot.

Plus what would have happened if they caused the bike to fall?  Damaged the forks?  I felt more than a little violated here, and frankly it made my desire for a motorcycle cover all that more meaningful.  Then I had to ride home after pulling on my rain gear. 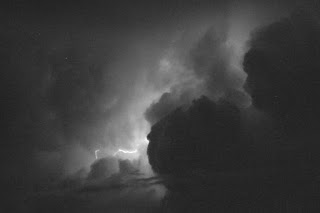 The weather has been bad all week and I know that eventually I would have to ride home in a storm at night.    It's not something I've been looking forward to, I know that my vision would be lessened due to the darkness and I could imagine that the rain would not help any.  I started my steed up after carefully checking her over to make sure nothing was damaged as the first drops started to fall.   Mumbling, I pulled away into the night taking it easy at first allowing the tires to warm up and any excess water to dry off the brakes.

Traffic was unusually heavy for this time of night and somehow I got stuck behind a tractor trailer which not only moved slower than I would have liked and no matter how far I seemed to ride behind him kicked up a nice amount of water right into my path.  A sharp wind didn't help matters.

I finally got around the tractor trailer and a few miles down the road was blocked.  "An accident, got the whole side blocked.  Your going to have to detour."

Muttering again I took the detour, I know the road well and have often ridden it into work but I know it's full of deer.  Luck was on my side again as there were no deer to be seen.  Finally I made it home, about 10 minutes later than normal and well soaked.  My rain gear was probably one of the better investment's I've made as its kept me relativity dry.

The truth be told is that the ride was not as bad as I feared.  The downpour never came.  I rode in a steady but manageable light rain the whole way home.  I did wake up with a nasty cold the next day however.
Posted by The City Mouse in the Country at 3:48 PM

Robert, get a Griplock. Much easier than a disc lock, and it would have foiled the bike movers. Here's hoping the rain gear holds up.