I've been giving a lot of thought to how I look at things lately. I was driving somewhere the other day in our car, down a semi-twisty road I ride my bike down sometimes and thinking about how the view changed.  On the bike I start at the outside of the curve, leaning into the apex and then accelerate out of it...trusting physics.  My view of the road changes as I start on the outside and then move in.  On the outside of the lane I have a much better view of what is ahead of me, I make slight adjustments on the brakes and throttle as I go...I am engaged.  Driving the automatic transmission car I felt none of this.  My view of the road never changed as I flew through the curves.  I don't think many people realize that just by changing your position, moving a few feet in either direction gives you a different outlook, a different perspective.

As I sit here and right this a friend of ours lies in a hospital bed awaiting open heart surgery.  Another friend of mine, who I know only online, has a 19 year old daughter with a brain tumor in the hospital.  I sit here and complain about my job and worry about money.  Things that are really not important giving their circumstances.  Perspective matters.

I have also run a small business over the last few years.  I started it because of what happened to the economic several years ago and I needed to work, to make some sort of living.  Today I make about half of what my "normal" job brings in and have the chance to expand it by becoming a wholesaler of fine German Chocolates.  Their is also talk of adding a "food cart" to the business between my partners and I, to serve the needs of a local community college who recently had it's funding cut.  If we do this then suddenly the simple part time job that I do for extra scratch now looks more and more like a full time endeavor.  My perspective changes again.

When you look at the famed picture on the side what do you see first?  The vase or the faces?  All this information is being processed, filtered and your brain determines what is most important to you at that moment.   I thought about this a few nights ago, Susan and I didn't have a fight about my riding the bike and she knows it's important to me.  My little jaunts down unknown roads when I run a errand is my way of exploring, of getting to know the place I now call home.  She would rather I go to the store and come straight home.  My ride to work is my commute.  I take no joy in it...even though I do break up the ride sometimes by taking a different route if time allows.   To her it is "my riding time" and she sees no difference between it and my barreling down twisty roads over a weekend.

Just a moment ago I read that above paragraph to her...I was wrong.  It's not that she minds me going, it's that she doesn't know where I'm at.  If I wreck on a back country road, and am taken to a Hospital in Tampa she would not know about it.   Perspective matters.  Her view of my little rides now makes sense to me in a way it didn't.  We now see both the vase and the faces!

What does this have to do my motorcycle?  With riding in general?  Two things happened to me this week that dealt with perspective.  First was an incident involving me sitting at a stop light waiting for the light to change.  I got involved in a slight altercation.  I'm not going to go into the details of it, because frankly I don't wish to worry those that love me.  Lets just say that I drove in angry to work, so angry that at one time I seriously considered pulling off the road to relax a few minutes...because I was afraid I would take out my aggression on the bike and ride faster than normal, or cut off other motorists.  I had to remind myself that in Florida we have "conceal and carry laws" and "stand your ground" laws.  If the idiot in the cage that pissed me off was as stupid as his actions where...then who knows how stupid he was?   Or what other stupidity he was capable of. 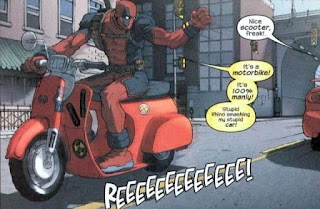 The second was I pulled into a store to treat myself to a drink.  A young man was there, surrounded by a gaggle of young teen age girls (perhaps this grouping should be called a "giggle"?) which he was obviously responsible for.   His eyes light up seeing the Burgie, and after a few minutes talking about the usual questions (gas mileage, can it do highway speeds?) - Questions that all Burgie owners are asked at one time or another he said simply.  "I need to get me a real motorcycle."  he said, with a look of longing in his eyes.

I let the comment slide as he piled his daughters and their friends into the mini van, a look of tired resignation on his face.  After all, it's all a bout Perspective.

Wow, what a really great post this is. Yes, perspective matters.

And, yes. It was wise to remember the possibility of what other stupidity "the idiot" might be capable of. Here in Missouri we have similar laws...stewing and stressing but just moving on down the road seems the best policy.
~k

My thoughts are with your friends and their health challenges.

As for anger over poor behaviour, I tend to get angry in the car, but not when I ride. Thinking about this now, I think it's about pressure.

For instance, we live on a scenic to lane road that borders the lake shore. On weekends the people I call the "spandex crew" (Tour de France wannabes) tend to ride in packs four abreast, completely blocking cars. They are quite content to lead a parade, yacking it up amongst themselves, all tight-ass, smug and condescending. They go ballistic if you dare honk at them to let you pass. In the car I blow a fuse. On my bike I just sail past.

I think that's the difference in my case. People can interfere with me in my car, but can't do so when I'm riding.

Last week a wannabe fast & furious type in a hopped-up Honda Civic decided that I shouldn't filter past him on a clogged access ramp. So he swung left to block my progress. In a car I would have gone nuts. On my bike I literally smiled, and swung right to pass him in the huge gap he left on the other side. Within minutes that bucket seat ape was way, way behind me and gone from my mirrors and my thoughts, until just now. I think that's one reason that riding is more serene for me than driving. On the bike I can't be contained by the idiots.