To Modulate or not Modulate, that is the question

For the coming Christmas Holiday my lovely girlfriend bought me a Kisan Path Blazer Headlight modulator kit.  What this does is "flash" the headlight at oncoming traffic...the idea is that it makes the oncoming motorcycle that much more visible.  They certainly do catch the eye, and frankly when I've been riding or in my car, I've always found them to be a little annoying than anything.  You notice them however, which is the point. 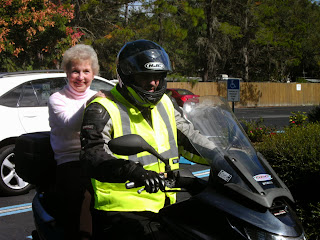 I suppose that the best safety gear is the stuff that you never think about.  A fire alarm goes off when there is a fire, but you never really think of it till it screams in the middle of the night.  A steel toed boot is forgotten on the foot of the construction worker till a hammer falls on it.

The picture above shows my full "battle gear" (the woman on the back is my mother getting a photo op).  Each piece of gear serves a purpose, and I no longer think about putting my gloves on or wearing a jacket.  It's become habit, it's became part of who I am when I ride.  Sure at times it's been hot and uncomfortable, but I know it only takes a second for something to happen, and my gear has proven it's worth to me once already.  I will not ride without a helmet, and the few times I've gone somewhere without my jacket have felt weird.  ATGATT or nothing.

So I will be honest, to review the Path Blazer would be a tricky job for me.  Riding the bike, I'm not seeing it.  I will never know if a car was going to pull out in front of me only to see the flashing light and go "Oh, how annoying.  I better stop."  If it helps keep me safe when I ride that is worth the money.  The light only moderates during the day, it has a sensor that shuts it off at night, which I understand is the law.  Plus, would I really want a strobe light effect driving home at night?

Nor did I install the device, having neither the tools or the knowledge to install it.  So I can't tell you how easy or not it was.  However considering the mechanics told me it take about 90 minutes to install it and it took closer to 3 hours...I'm going to go with pain in the ass.

So why write about it at all?


Simply because more cars are using daylight running lights.  Motorcycles, since 1978 at least, have been designed voluntarily to burn the headlight during daylight hours as a way of making them more discernible.  Now, due to more and more cars using running lights, it's became even easier to lose a motorcyclist in the mix.  Will modulated headlights be a standard on motorcycles one day?

Sadly most motorcycles accidents happen either because a car did not see the cyclist or because the cyclist was being unsafe in some way.

At the end of the day...I want to come safe.  So I practice ATTGATT, I (more or less) obey the traffic laws.  I don't lane split.  I am on my bike nearly every day by choice...so if the modulator helps get me home in some small way I recommend it.

I'll recommend it to you too.  Next on the to do list.  Rear brake modulators.
Posted by The City Mouse in the Country at 7:19 AM

Rob, I considered a modulator but I think they're illegal here. Only emergency vehicles are allowed to have modulating headlights.

I do have a modulating brakelight and sequential turn indicator unit from Admore which I highly recommend. They have an even bigger one now that I think I will upgrade to.

I have also considered a modulator before as I've noticed them from quite a ways down the road. On an open two lane highway, I think they are a wonderful tool to help you be seen even if only a bit. On a divided highway, I'd turn it off as then it would be an annoyance. Same if you were following someone.

Since it's use should me "managed", I wouldn't put it into the category of "set and forget".