First off - we here at the Scooter Revolution want to wish you and yours a happy Holiday season.  May the upcoming year be joyful and safe for you and your loved ones! 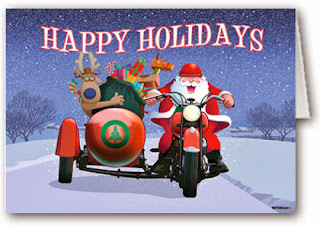 The end of the year is a time for us to reflect on what really matters.  At the end of the day, it's not about how many miles fell under our wheels, about the number of posts or even if how many people read this blog.  What matters to me is...did I grow as a person?  As a biker?

So here is my top 10 posts pulled from the posts that I have made (or will make - more on that in a bit) this year.  Links are included in case you wish to read that post for the first time or for the 100th time.

How could one of the top 10 posts be something I've not even made yet?  Because at the beginning of 2013 I had a vague goal in mind.  To ride further and more than I did in the previous year.  I started off badly, having no bike at all till early or mid February.  The fact that I will probably put close to 13 thousand miles on Kimmie in that time frame means something to me.  I accomplished that vague goal.

A short throw away post of sorts.  I tried to capture the wonder and joy of riding that I experienced coming home from a rare day shift.  The ride continued well after the work day was over.

This was not an long ride, maybe 25 to 30 miles total, but it was a wonder day out with Susan riding on back.  We attended a small town event, found a great twisty road and somehow managed to get some wonderful photographs.  It was a beautiful day.

What I loved about this post, and I purposelessly didn't go into to much detail about this part; is that Sue and I had a fight early in the morning.  My mood was horrible and it just got worse as the morning wore on.  Till I got on the bike.  This post is about the trans-formative power of riding.

Back in January I was still recovering from a indecent that I had.  At this time I didn't have a bike, although there was no doubt in my mind that I would ride again.  If there was any doubt in my mind they were dissipated the second I saw the wonderful hilly and twisty terrain of Roatan, Honduras.  As the tourist bus creaked along all I could think about was riding these same streets on a motorbike.  To lean into the curves and top a crest with nothing but ocean before me.  I realized that riding was part of "who I am."

I am still raving about the cashew wine too!

A wonderful 110 mile round trip with Susan on back.  This was really the first time that we rode for extended periods at highway speeds and at night with her on back.  A good day, a good time and some really...really fantastic food...and wonderful memories.

The trip to the actual temple was a short one and I spent maybe an hour or an hour and a half total there.  Afterwords I rode with two destinations in mind.  I took the long way around, riding back roads and cross streets and slowly making my way towards those destinations.  At the end of the day, my tire went "POP" and I had to replace it.  But again, I was OK with it.  The day was warm and lovely and the miles I put on the bike were good ones.  I could live with a bad tire.

I have to admit that I was a bit surprised at the amount of interest this "throw away" post generated.  However it did point something out to me that I had missed.  I was using the bike for nearly everything anymore.  I jumped on it at all times of the day or night to run to the store.  To go to the doctor.  To live my life.

#2 - The Equinox to Equinox Rally

When I entered the rally I did so with one goal in mind.  To get out more, to ride more.  I accomplished that goal and finished a very respectable 13th out of 200 + contestants.  I also proved something else to myself.  That even though I was on a scooter, I was still racking up points and miles.  I think I needed to prove to myself that I could ride further, ride harder than many on a "real motorcycle."  I accomplished that goal.

I also got to go places and see things that I would not of otherwise been to.  Isn't that the goal of riding?  Of travel?  I think so anyway.

I have to admit, at times earlier in my "biking career", I was feeling like a poser.  I rode a scooter.  I don't have a tattoo(s) nor do I fit what ever it is a "biker" is supposed to look like.  Well, I guess I got the making of a good beer belly.

Then with this post I realized something.  I was out there every day, in all types of weather riding.  I was out at night, I was out in the heat and the cold.  I choose to do that.  I choose a two wheeled life originally because I wanted to save money...but then it became something more.  I became a biker.

So why was I worried about what I rode or what that moron on the 30K Harley (you know the one with under 3,000 miles on it) thought.  I was doing more than most ever did....and I wanted more.

Posted by The City Mouse in the Country at 10:47 AM

Merry Christmas and Hoppy Holidays to you and your family.

I have enjoyed reading your blog in 2013 and look forward to more posts in 2014.

It's nice to reflect on the previous year as you head into the next one.

BTW, I ride a scooter and I am no loser! LOL

Whatever you're riding, you're a "biker"!

Merry Christmas or Happy Holidays to you and your family!