To Leave or to Stay

These past couple of months have been interesting to say the least.

The talk about me getting a new bike is settled for now (I will be buying a new bike by year's end).  A new dilemma has reared its ugly head in our family and is one, which while not consuming us, has certainly kept us awake at night.

Should we stay here in Florida, or head back home to Pittsburgh? 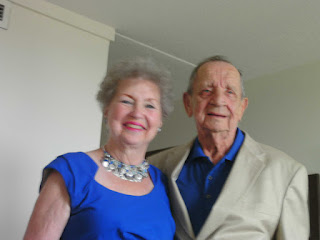 This all has to do with family.

The lovely Susan has family there, so do I, but her mother is starting to show signs of Alzheimer's disease.  Sue is the oldest child of five and it seems, the only one with not only the ability but the desire to help her mother.

Then their is my family.  My father is in his mid 80's and has two benign tumors in his head.  My mother, 10 years his junior, is capable of taking care of herself but she can't drive and is showing signs of dementia.  Unlike Sue's mom, she has not been tested but the signs of the two illnesses are similar, and my brother can not take my mother in for a variety of reasons.

Both of them will refuse to move to Florida.  Sue's mother is rooted to her home in Grove City, PA (about an hour north of Pittsburgh) and my mother will not leave her only granddaughter.  My father, always the stoic, knows that the best care he can get is in Pittsburgh.  It makes sense for him to stay.

We are faced with some startling realities.

1)  Our parents are not immortal.  No matter how much we with they were.

2)  I have lost two aunts to Alzheimer's in the last 3 years.  Now my mother is showing signs of it or dementia.  This scares the hell out of me.

3)  Susan's medical issues can be better served in the cool of Pennsylvania, as the excessive heat in Florida can effect her more than we like.

It does bring up a good question though about what is home.   Sue's family is rooted to the area, she is too...even though she moved 1000 plus miles to be with me.  My brother feels the same way.  Although my parents have moved and traveled a lot since retirement, they still call Western Pennsylvania home.

I love Pittsburgh, it's rivers run in my veins and I do like going back to it.  I've written about it before.  It is really a great place to live.  I remember reading somewhere that if Pittsburgh was a European city, people would flock to it.

However home for me is wherever I've hung my hat.  I've lived in Tampa for over 10 years, in Charlotte, North Carolina for over 10 years.   Charleston, South Carolina for a bit.  Savannah, GA for a bit.  I've considered taking a job in Jacksonville/St. Augustine, Florida at one time (and in hindsight, I should have but that's in the past).   I was also offered a job in Boise, ID early in my career.

Pittsburgh may always be "home", but somewhere along the way, it stopped being "home."

I've been halfway around the world and am serious planning on retiring to Portugal if Sue and I ever break up or she dies before me.   I'm not joking.   I've looked into it.

Jack Kerouac must have influenced me more than I thought he did.   Jean Genet too but for completely different reasons.  I remember a friend of mine - Matt the Muppet - handing me that book when I was in my 20's.   "This book will fuck up your life."   To the young philosophy minded education major, it did.    But I regress.

So here I sit, a still young man that can not imagine himself being 52, considering what he will do.  Considering yet another career change and wondering if a move would be helpful at all.   I'm not sure if I could even find another job paying what I make now.  Nor am I sure I wish too.

When my grandparents passed, I was still a young man.  I didn't understand what my parents (who were my age) were going through.  What they were feeling.   Now I face the same choices, the same decisions that they did.  It's not easy.

The reality of it is starting to sink in.
Posted by The City Mouse in the Country at 6:56 PM