It all started with a dinner party

It all started at a dinner party with friends on a Saturday.   Craig, my Harley Davidson Road King owning friend was all excited about a new Triumph he was thinking about buying, it's an all-black softail.  He talked it up like the second coming, and frankly I'm happy for him, its been a long time since I've seen him excited about anything.  He deserves a new bike...and he wanted me to go with him when he picked it up this coming Saturday.

"You can buy an new bike for yourself Rob."

When I'm asked, and I am asked, if I miss riding...the answer is always "Sometimes."

I don't miss sitting in traffic on the way home, of being hot or being rained on, paying insurance on the bike, having to deal with dumb questions and stupid people on the roads.  The eternal bane of working on a bike.

I do miss the friendship you have with other bikers.  I do miss the joy of riding.  I do miss the "de-stressing" that a good ride can bring after a stressful day like today was.   It does pain me to see a group of bikers heading in some direction towards some adventure.

"You have had a lot of adventures, I like hearing your stories." Melissa, a friend of mine said. 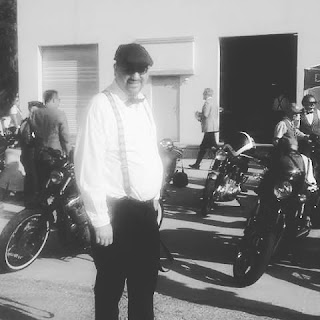 The recent advertisements for the Distinguished Gentleman's Ride I've been seeing on Facebook and YouTube have got me wanting to get back on a bike.  The ride I took part of in 2016 was one of the greatest rides I've ever been on.   Recently riding has been on my mind.

When I got my license renewed recently...I debated about leaving the motorcycle endorsement on it.  I paid the extra few bucks and did leave it on.

Then here I am, sitting at work...casually type in "Burgman for sale in Tampa."  I found one.  It's three years old but was used as a demo only and never really ridden much.

The dealership has it under priced probably, wanting to get it off the floor (it's about 3K under similar bikes).   It's got the ABS and comes with the Executive package.  It's only a 1 to 2 hour drive from where I am depending on traffic and conditions.

I do some quick math...I can make a payment work.

Now it becomes a matter of "Do I really want to it on one again" or not.  Susan would like me to buy a trike if I buy anything; feeling that they are more stable.   Well my strength in my wrists have come back, I still have some pain in my right one nearly two years later.

Although my independent agency has not taken off like I have hoped.   I ended up going back to work for a steady paycheck...and it's not at the rate I should be making.  I've actually considered leaving the field recently although I'm not sure what else I can/would do.

Then I close my eyes and think back...sure most of the memories are rose colored.   Then I kept the blog up for 5 1/2 years, trying to write something once a week...enjoying that, having adventures.   When the accident happened, I was finally starting to feel like part of the community.  I was finally feeling like a "biker" whatever the hell that meant.  To return to that....well I would enjoy that.

I can drive over to Deland after work, I can apply for the financing online.   I can have everything done by the weekend...pick it up on a Saturday and be home about 2/12 to 3 hours later...because you can never ride a straight line on a bike.

Than again...maybe not.  I read what I wrote a few days after the accident.  Remember what Susan told me, remember that I went into shock and spent a miserable night at a hospital.  Even though I was well insured (it is my business after all), I still had sticker shock at the final bill.

I still keep the Scooter Revolution Facebook page up.   Sometimes posting a story or cute little video I come across.   Sometimes I still comment on bike pages I follow or a blog I read.

I've found a Kymco 500, Kimmi's twin sister (Regina?), at a better price and a brand new model at that.   I've looked at a very affordable MP3, While I've considered it...I keep talking myself out of it.

If their is any doubt should I be on a bike?  A bike is designed to be ridden and not placed in a garage.


Posted by The City Mouse in the Country at 9:24 PM