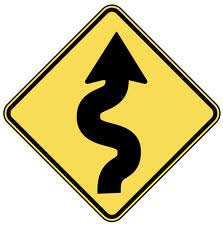 Over the Thanksgiving weekend I had four days off, then worked a day and had an additional two days off.   Lots of time to get the Burgie out and do some riding, but it didn't work out that way as family obligations and other duties kept me off the bike till a glorious day just ripe for riding.   Warm and sunny the road called out...."Twisty's Robert....Twisty's".


Gary B and I headed out, him in the lead.   He in the lead through orange groves and country roads, for 110 miles we road a circle north and south, east and west.   Something happened somewhere in the route, I started to feel a bit more confident taking some turns.

I felt a little bad as Gary had to keep slowing down for me, going through the curves with practiced ease, but I needed to do this at my pace.  I felt that I was lacking experience taking the curves I knew Gary had planned.  Gary has about 10 years if not more of riding experience on me, and he knows the roads we were riding well.

I took my time, feeling better and more confident with each curve of the road.  Each time letting the road and the bike tell me how to move.  Leaning, slowing down, powering through each curve.

A little explanation is in order.  Since buying my bike,  I've been a commuter traveling the same tired roads day in and day out on my Burgman.  While my route to work offers a little variation; I can ride to work a few different ways...taking the highway briefly or the twisted back road....a straightaway country road...the truth is it's pretty much the same ride day in and out.  So I was feeling a little tentative then  as we started the ride.  I just don't get to do twists and turns often enough to feel comfortable with them.

Towards the end of the ride I was feeling more and more secure.  The smile started to return to my face.

On Sunday, I went out again.  Driving into a blinding setting sun I had left early enough to hit some winding side roads I know of near work.  Again I went to get used to the twists and turns of an unfamiliar road.  In and out and powering through.

It sounds silly as I write this, that I should have a fear of twisty's.  It's not really a fear, it's more of a respect.  I have not had much chance to ride them. To practice, to simply ride the roads.   Florida is full of straight roads or a road that slightly curves, easy turns to make.   Some sharp curves are here and there and those are the roads that I want to ride, to practice on.   You don't become a better rider by riding the straight away...you ride the twisted roads.
Posted by The City Mouse in the Country at 9:48 PM

Nothing wrong with respect for twisties, and experiencing them in your own speed. I am sure that your buddy is aware of your skill level and doesn't pressure you into things you don't want to do.
You know what they say, there are three rules in learning: practice, practice, practice. Enjoy your scoot!

It was a fun ride Robert. The weather was perfect for optimal riding conditions. I didn't mind holding up for you . . . I remember what it was like. You'll be scraping the kick-stand before long!

Richard - you are wise to ride within your abilities. My hubby has been riding for 35 years and at times I feel like I am slowing him down. When we stop I ask him and he says nope and he is glad that I am learning and experiencing things at my pace and he will always be waiting for me no matter how pokey I am. He is a very good and patient teacher. He loves that I am riding and loves that we ride together.

I love riding twisties - it is very intoxicating. We have a very twisty route on the island and it is marvelous! I feel more confident everytime I go out and ride these types of road.

My daily commute is pretty boring, it is essentially a 10 to 15 minutes straight line ride. Ugh.

You watch before long you will want to ride nothing but twisties!

Sadly here in Florida we seem to have nothing but straight roads that go on for ever. I plan on getting out more to do some more twisty's. In fact I feel a new years resolution coming on.

Robert - Sorry I had Richard blog in my head too when I was writing this - too much candy cane martini! I apologize! *note to self no more martinis when blogging.