My plans for Saturday were simple, sleep in a bit then go down to visit Solomon's Castle.  Sue and I were planning on spending the day, it's about a 90 minute ride south 1 way, and then come back.  Maybe check out the Zephyrhills Music and Motorcycle event afterword.

As it so happened life got in the way of Solomon's Castle (next weekend for sure!) but we did spend a little time at the event.  Some photo's if your interested follow.

I was surprised there were not more motorcycle merchants or dealers at the event.  I know Z-hills is a small little town and the event was not really organized well.  I live there and didn't learn about the event till a week beforehand, and the only reason I did was because my mom gave me her Sunday paper.

Z-hills, as the local call it, has a lovely park which the bikes were allowed to drive through.  Music was provided by the Dive Bar Stalkers right off of main street itself.   The band lived up to it's name.

What I enjoyed was the diversity of the bikes and the creativity on many of the paint jobs.  One guy was doing pin stripping, and yes, I considered it for the Burgie but with some damaged plastics it be a waste of time and money.

This damage is not something I'm happy about and needs to be fixed.  This is my next project.  I'm going to work on making my bike look less beat up.  I'm planning on keeping it for years, so it needs to be cleaned up.  I would like to have my bike shining again.

Which brings me to the next photo.   While walking about I came across a restored with all original parts 1974 Triumph Bonneville 750.  It only had 6600 miles on it.  The same amount of mile that were on my Burgie originally.  What impressed me was the amount of time and love that went into that bike...and the story that bike must have.  Out of all the various bikes there, only two really brought a smile to my face....the Bonneville was one.  A true classic. 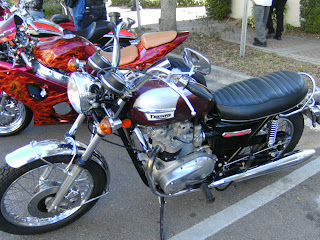 The other thing that caught my eye was truly a sight to behold. 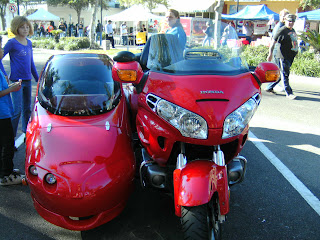 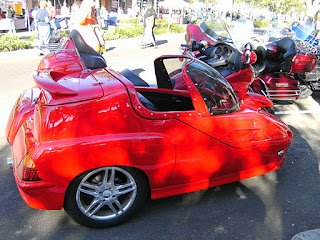 You gotta admit...that is pretty cool.

Posted by The City Mouse in the Country at 2:20 AM