Wrenching...or you can teach an old dog new tricks after all.

What we decide to do about that determines what type of man we are.  Do we ask for help, swallowing our pride in the process?  Learning something in the process?  Do we ignore the problem?  Do we let the women in our lives silently make the phone calls needed to get the problem resolved?  Do we curse and swear till blood oozes from the cuts on our hands and we cry out in victory as the goal is accomplished?

When it comes to anything mechanical or requires the use of my hands I'll be the first to admit that I'm the proverbial monkey with a gun.  Which really is odd, I've worked in technical fields most of my adult life...but having "book knowledge" and "field knowledge" really are two different things.  So there comes a time in a man's life...when he needs to get his hands dirty and work up a good sweat.

With that..I decided to do some maintenance on Kimmy.  She has sat barely ridden for the last two weeks or so, a combination of me being out of town, some other projects that needed done, rain and it just being to freaking hot to ride.  I noticed she seemed to be riding a little rough last time out however, so I thought I check every thing that I could, change out the air cleaner and determine if she required a little more care.  In other words, was a tune-up in order? 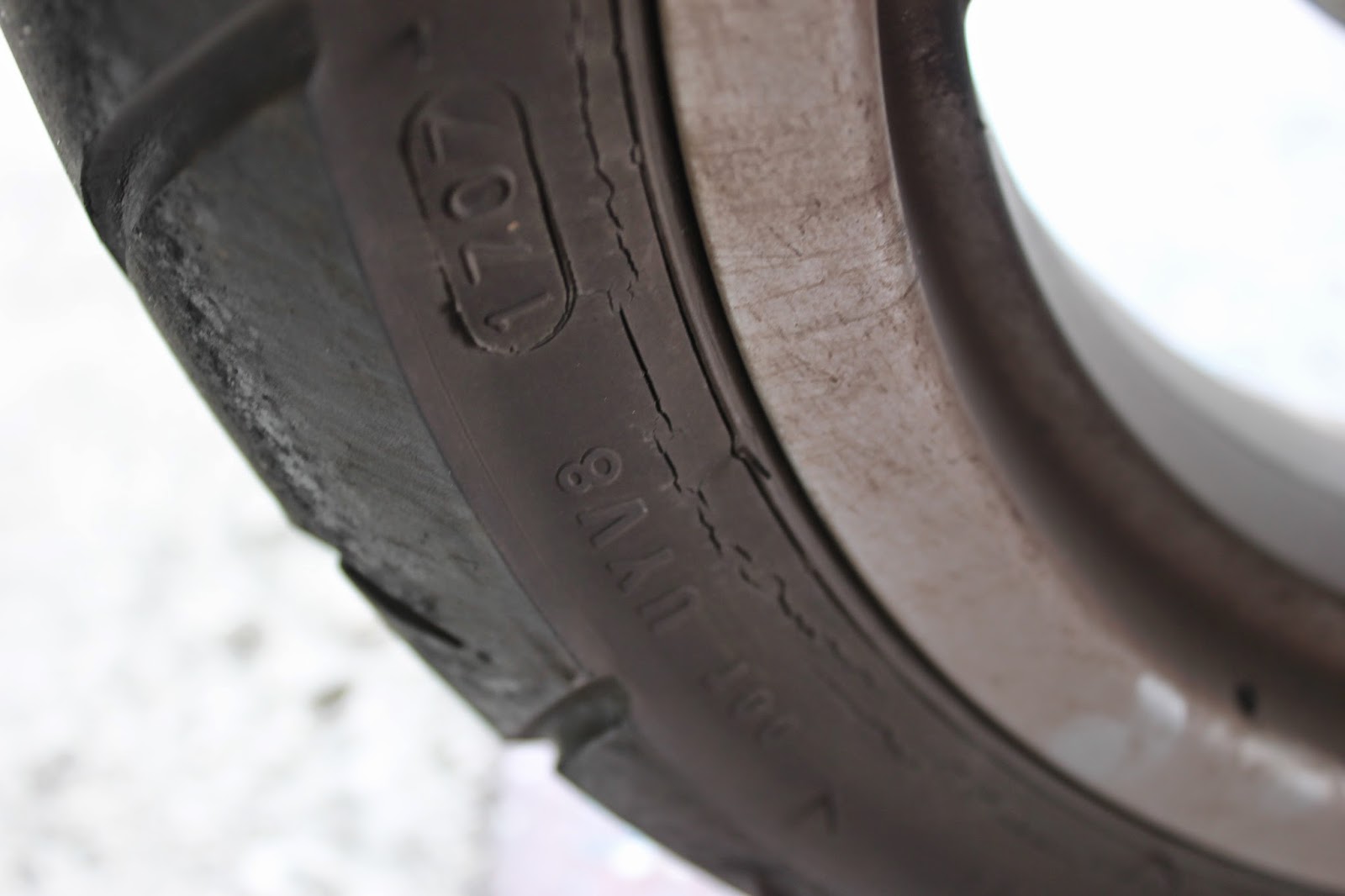 I knew there were some issues right off the bat, the tires were showing signs of cracking and "heat checking" which I understand is one of the issues of living in Florida.   In Florida we have near constant sunshine which, combined with heat and humidity, will break down rubber quicker than usual.  I'm a little concerned and frankly hate the idea of replacing both tires, but that is the safer move.  The treads are generally good on front and back but I'll be needing to replace them soon enough.  Based on what I learned from sites like the Kymco forum, Michelin City Grip tires looked like the best choice for me.  Two tires will be on order by the start of August. 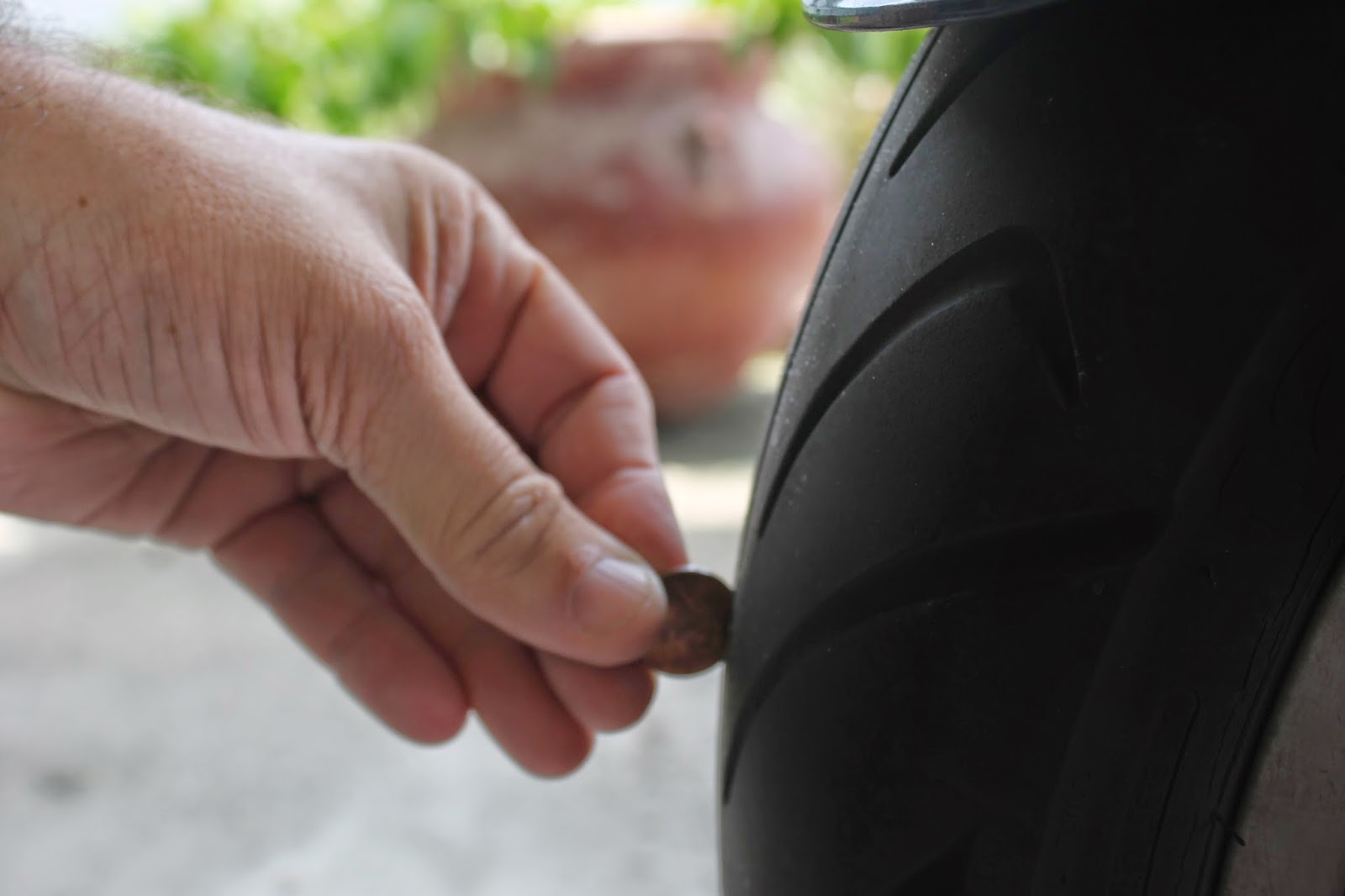 My brakes seem to be in order but since I don't have the training or tools to replace those that's something the mechanic going have to fix.  Although at only 18850 (30,336 KM) miles I'm not to concerned...yet.

I also decided to replace the air cleaner, after all to the best of my knowledge it was the original filter and probably about due for a change.  A quick ride up to my local mechanic and the the filter was ordered for $45 - certainly I could do better than that!  TO THE INTERNET!

One of the things that I love about Kymco is the ease to get to things.  A pop-out plastic panel and the removal of five screws and the new air filter was in.  For the cost of $45 dollars US.  It seems that one of the things I don't like about Kymco is the lack of after market parts.  Honestly it was a pain in the butt to get the filter out but she did come out after much cursing and the liberal application of lubricants.  It was so dirty that I actually think it was the original filter.  I should have taken a picture of it but honestly forgot to do so.

Coolant check!  Done!  I had the oil changed before I went to Jacksonville, so I was good on that.

It sounds silly - even to me - that a 48 year old man should be happy about doing basic maintenance on his bike.  Truthfully though, I was never really taught how to do any of this as a kid, so when the dreaded zombie upbringing happens I'll be served up on toast.

Posted by The City Mouse in the Country at 1:14 AM

There is nothing silly about being proud of accomplishing something. You may think it is small but to others it won't be.

Good for you on doing the filter.

Well done. A small but important start. To me one of the best reasons to do your own basic maintenance is that you get to do it to your schedule. Have the parts on hand and then when it's raining, or too hot, or too dry, or you just don't have enough time for a ride you can retire to your garage/car port/parking spot with a hot cup of coffee (or something stronger if so inclined) and work on your bike. No need to book appointments 2 weeks out and so on.
Get yourself a shop manual and you'll be surprised just how much you can do with very simple tools and an ability to follow clear directions.

I too am one who is learning about maintenance as I go. I never got taught either when I was a kid and to date have never change the oil on a car. BUT, my KYMCO Super8 150 is a different story. I got it 4 months ago and I knew I wanted to do all of the maintenance. Purchasing a service manual (cyclepedia.com) has helped tremendously. I'm always nervous when I tear into something new on my scooter but I always take my time and get pictures or video to help me with reassembly. Basic maintenance, I've found to be pretty straight forward. Safe riding.