Darkness at the edge of town

The last few nights have been cool.  Kimmie and I take the long way home each time, letting the darkness envelops us.  I like to ride at night, even though my visibility is reduced and  I can see the small white tail deer grazing silently on the side of the road at times.  What should be familiar takes on odd and threatening shapes.  I think of our ancestors of million years ago, knowing that dangers stalked the night; a fear of the dark is not a bad thing.  It's a survival instinct...we really don't know what is out there. 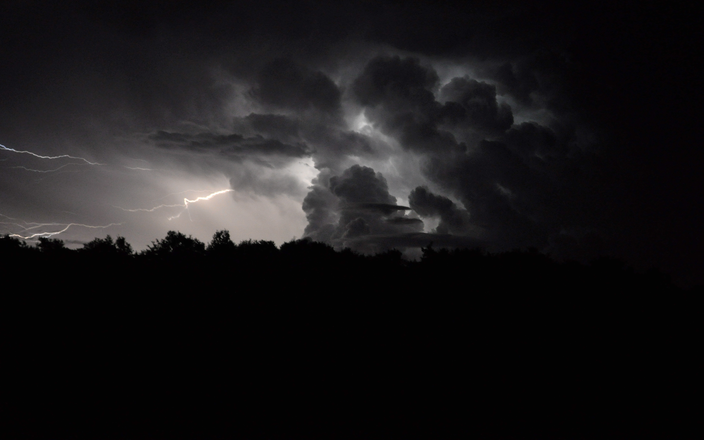 It's late, later than I normally ride home but I've been feeling good.  Kimmie purrs like days of old and I lean easily into the turns, the only light from her and a storm gathering far off.  Heat lighting has filled the sky the last few nights.  At a stoplight I hear the noise of the night birds, soft and lilting.

Off in the distance on another night, clear of clouds, I see the red flame of a meteor as it makes it way to the Atlantic...it glows like a cigarette tip in the sky before breaking up.  I sit and watch it in the middle of the street, partially amazed and partially quietly engaging my scientific mind.   I think about angles, about velocity and about how far and long that piece of rock must of traveled to find itself here.  Burning up so a lone biker in the middle of Florida could look up in wonder.

It's later now.  I still have some way to go. I curse myself for not pulling out my phone, so I could have caught the last moments of this glorious rock to share.  There are no other cars out, I pull out and head through town.  Past the shuttered buildings of downtown Zephyrhills.  I take a turn and the light from a building bleeds out into the street.  It's not a comforting light and somehow seems out of place here.

For several nights in a row I consider riding on.  The days have been hot and muggy but the nights are anything but, and as I flip up my visor I can sense a change in the air.  The endless possibility of summer and the open road.

I have to remind myself that watching the heat lightening while traveling on an empty road in the middle of the night is not a good thing.  Still though, that storm could be 100 miles away and it's power and beauty attract me like a flame attracts a moth.

I wake up early in the morning with only one desire.  To ride in the cool morning air and I try to dress without waking Susan.  Then I'm off, riding the roads that surround my house, riding with no destination or purpose.  A few hours later the heat of day grows, the thunderstorms move in again...and I wonder if I'm back to my old ways.  I hope I am.
Posted by The City Mouse in the Country at 7:19 PM

Good to hear you enjoying riding and wanting to ride.

I love riding at night, but my night vision is crap so I don't. I can do it on the back of hubby's though when I don't have to worry about piloting the bike.

I always enjoyed riding at night. It gets too hot during the day with that sun! Less traffic and less noise helps. And no radio for me either....
Glad you're getting back into riding!!

I am glad you have your riding groove back. I love riding in the quiet of evening particularly when the roads are quiet and car-less. Unfortunately here though it's quite cool and the don't have the heavy heat filled days. I am actually still wearing my regular winter gear with the quilted liners zipped out and it's very chilly without the gear. We bikers are never truly happy with weather and I always wonder what "just right" would be temp and humidity wise, I guess though of it's not raining and below 10 C it's all good from my perspective.