Gremlins - Part of the learning curve.

I was hoping for a simple solution.

In the Kymco Xciting 500 the fuse box is located next to the battery.  The battery is enclosed in the tail end of the bike, almost directly below my top box, so two screws is all I need to remove the battery and check the fuses. 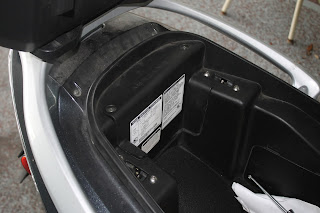 Kimme has a "trunk" under her seat for a better word, there is a light in that trunk.  I take off the battery cover and the light comes on....bright and powerful.  Okay....weird.  Maybe it's not a fuse.  I tighten the battery cable connection.  I replace the cover.

Nada.  No power, no turning over.

Well there is no metal for it to short against unless it's touching the screw.  It's not.  Which means either a bad connector or a bad cable.  I have had issues in the past but they have been intermittent, and often in cold weather.  Could it be that simple? 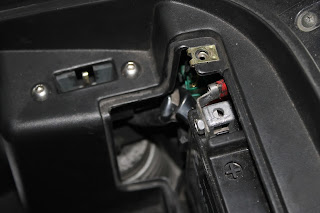 It's not the best photo but you can see some wear and tear on the end of the cable...could the battery, which was recently replaced, be the wrong size and be causing the cable to rub against something?  Therefore causing an intermittent connection?

Could I be overthinking this?

I replaced the protective plastic piece and started her up again.  Nothing.   Take it off or adjust it somewhat and she fire up with out issue.

I considered riding without the cover, but frankly didn't like the idea of the battery bouncing around in the back.  Since it sits above the rear tire the cover also serves a protective function, preventing water from possibly being sprayed up onto it. 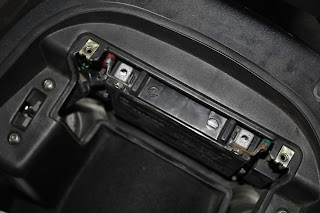 Now it's decision time.  I became aware of this problem last Saturday.  I had every intention of getting it fixed myself.  Certainly I could order the part, or replace it myself.

I made sure I tossed a Phillips screwdriver into my trunk just to be sure I had one if I got stuck at work or on the side of the road.

If I want to ride to Jacksonville, or to Charleston, hell: if I want to ride anywhere I should know how to fix simple issues like this.  I need to find a place that does "Wrench nights" locally.
Posted by The City Mouse in the Country at 9:57 AM