**For information about preparing for riding in cold weather please go here.**

I live in Florida.   Land of Sunshine.  Orange groves that stretch on forever and a day, home of the mighty Kumquat.   At our most southern point we are only 90 miles from Cuba.  In theory it should be warm.

Every year the grey and blue tufted snowbirds come from the north to escape the cold weather and miserable white stuff that is considered a four letter word by your friendly author.  Now sadly due to several reasons I've not been able to ride as much as I would have liked over the last two weeks or so.

When I've been able to ride, it's been a bit...well shall we say freaking cold.  Over the last few days the temperatures have varied from in the mid 50's to as low at 19 degrees.  It's put me into an interesting position and something I never really considered.  Riding in the cold.

It's easy to forget that we do have cold snaps here.  I am originally from Pittsburgh, Pennsylvania and still don't consider anything below 40 degrees or so "cold" but I also lived in Charlotte, North Carolina for about ten years or so, so I know my blood will eventually "thin out" and what was once "cool" will become cold.  Then  freezing and finally freaking cold.

Luckily this cold snap only lasted a few days.  Still though it was long enough to see the natives break out the parka's to go along with their flip flops.

So I did what all geeks do.  I turned to the internet for research, reading that it's not so much the cold that will get me as the wind chill.  That made perfect sense considering I'm buzzing down the road open and exposed to the elements.  About warming my hands on the headlights, which is a little tough to do due to the design of the Burgie.   About how to protect my exposed skin from the wind.

I ended up taking my car in most of those cold days.  I felt more than a little embarrassed by doing so, after all I am planning on letting my bike replace my car. In fact, one of the reasons I settled on the Burgman was because it was designed for commuting and touring.  In my mind at least that means riding it every day to work and to the store no matter what the weather.  Cold and rain be damned!

OK, maybe I'm being a bit to hard on myself.  In the end it's all about safety for me and although it was unlikely to deal with ice on the road it was a possibility, and yes the temperature was low enough in some areas to allow it to happen.  I have to be at work in business attire most days, do I really want to drag sweaters and long underwear to work?  Do I really want to change in the bathroom just to drive the bike home on a 32 degree day?

The day will come where I will have to deal with cold weather.  Understanding and preparing for it just makes sense. 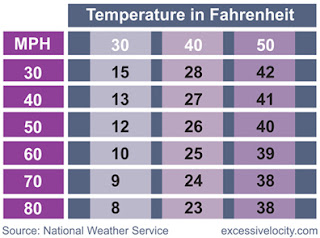 EDITED:  A nice little chart dealing with wind chills and ambient air temperatures. Something to consider when you ride brought to by the nice people over at Keep the Rubber Side Down blog.  What's interesting is that 10 additional miles of speed does not really effect the "cold" your feeling that much.
Posted by The City Mouse in the Country at 7:48 AM