I have been wanting to do a "joy ride" for a while now.  I've not had much opportunity to ride over the last two weeks or so other than to work which in its own right is a nice ride; but I've had the itch to ride different roads.  Every day I ride the same route, more or less, and I have been wanting...no needing to explore some quiet backwater places. 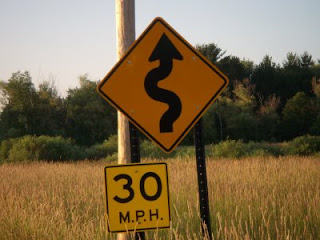 So today I did a little under 100 miles (93.8 to be exact) on a nice sunny day with not enough twists and turns to satisfy me, but enough to keep me interest.   Somehow I managed to get completely lost as well...since every road leads somewhere and I was  thoroughly enjoying my ride I didn't worry about it.  I don't have much chance to simply do a purely recreational ride anyhow.

I work second shift, my job can be 24/7 and on top of that I have another job that I work two days a week and takes anywhere from three to eight hours to complete.  In other words, I work a lot.    Since my girlfriend is unable to work, we spend our mornings together.  Riding 2-up with her is just not possible right now.  She feels that I need a more experience before she climbs on the back of the bike with me.  I know she is right.

All this limits the time I get for recreational riding and frankly since the untimely death of Gary B - I've no one to ride with.  That may change in the future but for now I'm a solo rider.  Riding with a friend is safer and in my opinion a hell of a lot more fun.  Not that solo riding isn't fun.  I've found a little 3 mile long stretch of road near where I work that has 15...yes, 15...wonderful twists, turns and bends.  Everything from sharp abrupt corners to a few sweeping rights and lefts.  If I get to work early enough I can be found riding that road.

One of the joys about about getting lost, I had originally planned on a 50 mile ride following a predetermined route, is finding the unexpected.  Even though I live in West Central Florida I just happen to live in Kumquat country.  A nearby town even has a kumquat festival.  I found the packing plant and a Kumquat specialty shop.  Sadly none of my pictures really came out well.

I drove up the road some, finally finding a route I recognized and a little winery right down the road some.  Now having been known to indulge now and again in the fruit of the vine I stopped.  Sadly I was riding so could not sample to many but what I did try was sadly lacking.  If your interested in Florida wines I highly recommend Fiorelli Winery.  Somehow however I ended up with a bottle.

I've only had the Burgi for a few months and am enjoying the ride a hell of a lot more than I would have ever of guessed.  When I first considered getting a bike it was for commuting purposes only, now here I am taking 100 mile joy rides.

There are a few things I wish I had though - the fact that I have a AeroStitch catalog has nothing to do with it (eye roll).  The plastic on the bike needs repaired and although scars might tell a story...they shouldn't be on a bike.  My stock windshield was really designed for a person much shorter than me.  I'm 6' foot tall and 200 pounds.  Not really heavy but big enough, and the wind comes right over the windshield and catches me in the upper chest and head.  I would love to have to have a Givi Airflow windshield and a top case to go with it.  Okay, I really don't need the top case but hey, it looks cool and a little bit of extra storage never hurts.  Particularly since I hope to take those longer and longer rides.  A backrest would be nice too.

My hubby had an adjustable windshield like this, and he as a 6ft something really felt the difference. The wind buffeting in the helmet became significantly less.